A Gift ‘Beyond Measure’

The Adrian art teacher expected the ultrasound at a Toledo hospital would confirm an issue with the umbilical cord in her 24-week pregnancy. Instead she struggled to process a deluge of information about the fetus: Absent nasal bone. Calcium spot on the heart. Thick nuchal fold on the back of the neck. Two heart conditions. 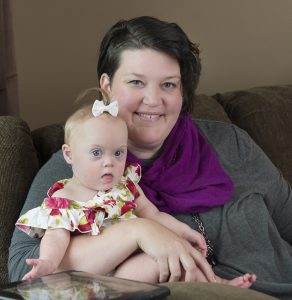 In all, tests showed six indicators of Down Syndrome in her baby. And interspersed among the litany of medical terms, she remembers the doctor saying, “I’m sorry; I’m so sorry; oh, I’m so sorry.”

Not long after that, Howard sent an email to her colleagues and friends in the close-knit Adrian Education Association, letting them know what she and her husband had learned about the baby and asking them not to feel sad and not to say “sorry.”

“That’s Annie, right there, just very open with everyone,” said Jeff Condon, AEA president and elementary school teacher. “She said in the email—‘Don’t look at me any differently. This baby is a gift from God.’”

Not that Howard easily shouldered the diagnosis, she said. “I sat in my car in the parking lot of the hospital in Toledo and cried for a good—oh, two hours, I’d say.”

Even harder to accept, however, was the assistance she would soon need from her union local. “I hate asking for help from people,” she said. “It’s really hard.”

‘We’re going to be fine’

The day after getting the news on that Friday in Toledo, Howard’s friend invited her to go picking for beach glass at a Lake Erie beach. Scouring the sand in silence, her friend yards ahead, she was overcome with emotion and sat down on a log to cry.

“I prayed like you wouldn’t believe,” she said, tearing again at the memory. “Then later, on my way off the beach, this plastic toy lemon was in my path—the same path I’d just walked in on—and I was like ‘Got it.’”

Remembering her moment of acceptance, she stared at a picture of the toy lemon on her phone—smiling and sniffling at once: “When life hands you lemons, you say Thank you, because there’s a reason for everything. That was the day I realized we’re fine. We’re going to be fine. And I got confident about it.”

Howard, who has taught K-12 art in Adrian for 14 years, is quick with a joke and laughs an infectious giggle that bursts forth in the middle of sentences. She points out her daughter, Hazel, was born on July 11, 2016—“7-11—and coincidentally my favorite treat is a Slurpee!”

She jokes that she and her husband are “the Slowskis”—taking their time and deliberating about everything. They dated more than eight years before marrying, and they waited another nine years before having a child to make sure they were financially set to raise a family.

She quips that her husband now calls her “the old gray mare” and then breaks into lyrics from the song—“The old gray mare just ain’t what she used to be…”—followed by more giggles.

In truth the past year has been a gravely serious time for the 36-year-old and her husband, Chris, a Truancy Prevention Specialist at the Lenawee Intermediate School District—but support from her union helped to lessen the weight of heavy challenges.

After her premature birth, tiny Hazel stayed two months in the Neonatal Intensive Care Unit with tubes helping her eat, breathe, ingest medications, and fight off illness. When she came home, the family awaited three possible surgeries—including an open heart procedure—while keeping Hazel isolated from the world to protect her from infections that would be life-threatening.

Because her heart condition made her fragile, the baby couldn’t go out—not to daycare, church or the grocery store. And Howard realized she not only couldn’t go back to work as planned in November—she didn’t even have a timeline to return. Doctors said they might need to wait two or three years to perform the riskiest operation.

She debated options with the help of AEA’s Condon and his knowledge of the Adrian teachers’ contract. Howard had saved enough sick days to take off work through February. She had to retain health insurance. She couldn’t apply for a disability leave, because the medical issue wasn’t hers. She didn’t know how long she might need to stay home.

“There were so many questions that I couldn’t answer,” she said.

That’s when Condon and two of her friends stepped in. Knowing she would find it difficult to ask for help herself, they solicited sick day donations on Howard’s behalf from AEA members—many of whom know and love her, since she’s worked in every building in the district.

She needed 67 days to stay home for the school year with full pay and benefits. Within two days of the request going out, 76 days were donated and more were turned away. Many of those members gave up summer cash payments they could have received for not using the days.

Sick day donations are not entirely unusual. Many local bargaining teams have negotiated into their contracts some form of sick day banks, administered by local union leaders, where members can give to each other in moments of need.

“Our members continually step up for each other,” Condon said of his local, which boasts a 98 percent membership rate. “There’s definitely a closeness in our association where we look out for each other.”

What was unusual was the speed and amount of the donations in Howard’s case. “I’ve never seen it happen so fast,” he added. “This was especially heartwarming.”

Howard called it an “incredible” outpouring that she appreciates “beyond measure.”

‘Everyone falls in love’

The Howard family turned a corner in March after doctors determined it was safe for Hazel to undergo the risky open heart surgery to repair a congenital heart defect—and the procedure was successful, leaving only about a three-inch scar on her chest.

A second surgery to repair a gastric problem in May also went smoothly. Hazel is now fed via a gastronomy tube (G-tube) inserted through her abdomen, rather than a nose tube. The G-tube will remain until she starts eating on her own in the next year or two.

Immediately her color improved, she became increasingly mobile and curious, and she was cleared to interact with the world—no more fear of germs and infection. In June, Hazel enjoyed her first camping trip, first swing in a baby swing, first playpen interaction with another baby.

“Now she’ll be sitting up or on all fours, and she looks around as if to say—You guys are seeing this, right?” Howard said. “I can’t believe her strength—her resilience through two surgeries, her NICU stay. She’s strong.”

Strong but sweet. “She’s such a lover; she loves to cuddle,” Howard said. “Everyone who meets her falls in love.”

Like mother, like daughter. Throughout the Adrian education community, Howard is admired for her hard work and leadership and loved for her creativity and caring.

In addition to her K-12 duties, Howard works as an adjunct instructor in the Adrian College Department of Art and Design and serves on the Executive Board of the Michigan Art Education Association. In the summer she helps to run an elementary day camp, Art Rocks Kids (ARK), connected to Adrian College.

This fall she will return to work, teaching sixth-grade and high school art classes and serving as the district’s arts coordinator, planning professional development, seeking grant money, and organizing events such as field trips.

She’s the kind of teacher who lives her subject. A working mixed media artist herself, she said she loves to teach kids techniques but set them free to use them in personal ways that communicate their unique ideas.

“I love when students walk in the door; you can’t tell who has difficulty with reading or who has cognitive impairment or who’s in special ed,” she said. “It’s an area of school they can find success in, and they don’t have to feel nervous.”