Election a Win for Students, Educators 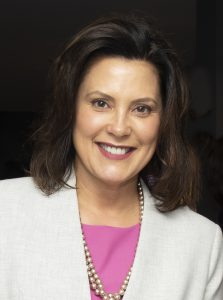 “From volunteering to voting, everyone made a difference for our students and our profession, and we should be proud of what we accomplished together,” she said.

Wins for a slew of MEA-recommended candidates, highlighted by Gretchen Whitmer’s victory as governor, represent a “course correction” for Michigan and public education, Herbart said.

Now the real work begins, according to the governor-elect. “Voters rejected agendas that don’t put our kids’ education first,” Whitmer said at a post-election news conference. “I’m determined to work with everyone who wants to make sure that is the future of our state.”

Polehanki said her win was a victory for anyone tired of the status quo. “This election was about bringing a new approach to Lansing—an approach that puts people over special interests to deliver clean water, better schools, and safe roads for every Michigan family.”

Koleszar noted he will be working in a chamber now more evenly divided between Republicans and Democrats. “With our governor being a Democrat and with the party divide being smaller in the House, this is an opportunity for bipartisan cooperation so we can get things done.”

Voters narrowed the Republican majority to six in both the state House (58-52) and Senate (22-16); chose all eight MEA-recommended candidates for statewide education boards; and for the first time picked women for all three of the state’s top elected posts.

MEA member Nate Shannon, a L’Anse Creuse economics and history teacher, won a 54-46 victory in a swing district. With his message of fixing the broken school funding system, Shannon found bipartisan support that was key to his victory.

Lori Stone, a fourth-grade teacher in Warren’s Fitzgerald Public Schools, had a decisive win in the general election in her second bid for House District 28. She knocked off an incumbent Democrat in the August primary.

“I’m excited about what I’m going to do next,” Stone said. “I’m looking forward to working in the Legislature to help improve educational policy.”

MEA-Retired member Sheryl Kennedy, a principal in Walled Lake, won her House District 48 seat by 10 points after vanquishing two opponents in the primary with 73 percent of the vote.

The governor-elect has a track record of working across the partisan aisle, and that gives Kennedy hope that problems can get solved. “I have nothing but confidence in Gretchen Whitmer as our leader,” she said.