It was early in the morning, still dark outside, and Gretchen Whitmer had a certain magazine interview to get to. She didn’t want to wake her teenage daughter, Sherry, but she hoped to sing “Happy Birthday” to her 16-year-old. 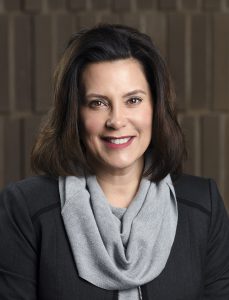 She did both—woke her and sang. Later she would “get the skinny” attending parent-teacher conferences at the East Lansing school attended by Sherry and sister Sydney, 14, and then take the birthday girl to get her driver license.

“I think the thing that keeps me grounded and focused on what really matters is my kids and my family,” she said.

Whitmer is running a tireless campaign to be Michigan’s next governor. She was the unanimous pick of MEA’s Statewide Screening & Recommendations Committee, and she has since garnered nearly every other union endorsement for her record of championing organized labor.

The Michigan Democratic primary election is Aug. 7 this year.

Given the pace of her days, she knows a lot about the pressures faced by moms, “whether you’re a paid working mom or a mom working at home,” she says: Breakfast made, lunches packed, dinner in the Crock-Pot before most people have gotten out of bed.

She understands the demands of caring for a family amid other stressors, including tending to the needs of aging parents at the same time. She was the primary caregiver for her mother until she lost her battle with brain cancer just a few months after Sherry was born.

Whitmer was serving her first term as a legislator in the state House, and she called that period in 2002 a “tough time” that reinforced her values and “eliminated my patience with problems.”

“We get lots of politicians that like to make political hay over the issues that we face as a state, and I don’t have any patience for that,” she said. “I want to solve problems.”

Topping her education to-do list is to restore education funding and protect it from being raided to bail out other parts of the budget. “The states that are turning around educational outcomes for kids are the ones making a meaningful investment in children,” she said.

She ironically noted the headline on a Detroit News editorial from the day before our interview: “Businesses Should Lead School Reform.”

“We’ve got a business guy leading the state, and guess what? He poisoned a city and has driven our education system into the bottom in this country. We need educators to lead the way on education policy, just like we need experts overseeing our water.”

Teachers and education support professionals have been disrespected for too long, Whitmer says. It’s a theme she returns to often: “We need to stop attacking educators’ pay, and their benefits, and their ability to determine what’s happening in the classroom.”

The daughter and granddaughter of educators, Whitmer laments that few legislators even visit public schools. “This Legislature continues to put forth new law after new law impacting the work schools are doing every single day, and they never even talk to a teacher, a parapro, a cafeteria worker, or any of the people who make up our schools.”

The lawmakers who currently control both houses of the Legislature don’t ignore all voices, she said. “The Republicans in Michigan work for one family: The DeVos family. That is who sets policy for my kids’ schools and for the schools your members are working in day in and day out. 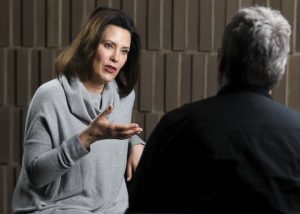 The daughter and granddaughter of educators, Whitmer sees damage from years of attacks on educators’ pay and benefits, in addition to the silencing of expert voices on education policy.

“They’ve corrupted a government that’s supposed to be working for the people.”

Among the destructive policies championed by DeVos and other wealthy special interests, unlimited for-profit charter schools have drained tax dollars out of traditional public schools that continue to educate 90 percent of students. Approximately 70 percent of for-profit charters perform in the bottom half of school rankings.

Whitmer wants to close poor-performing charters. If necessary, she would pressure universities that authorize those charter companies. “A governor with a backbone can use the power of the state budget to force the closure of charters that are failing our students,” she said.

She added that her plan to beef up “wraparound” services and support in high-need schools would go a long way to ending the proliferation of charter schools in impoverished urban areas. “Successful states don’t abandon schools like Governor Snyder proposed doing,” she said. “They wrap great support around traditional public schools.”

Campaigning around the state, Whitmer has heard in every city, town, and rural crossroads from educators frustrated by politicians’ disregard for their knowledge, expertise, and well-being.

The growing teacher shortage is a concern, not a surprise. “The fact we have anyone working in a school who qualifies for a Bridge card is an abomination,” she said. “How would you expect to lure people into this important profession if they can’t support their own family doing it?”

Reversing years of disinvestment in higher education to make college affordable again is another top priority, she said. “We have to make it more affordable for people to get education degrees without crippling debt.”

Whitmer served five years in the state House and nine in the Senate. She holds a bachelor’s degree and law degree from Michigan State University, though she originally planned to be a sports broadcaster. “I love sports, and there were no women on ESPN, so that was my plan.”

However, she got the “political bug” while doing internships in college and followed that interest into policy work for a time. She decided to pursue law school hoping it would offer flexibility and opportunity, and that is when she discovered her passion, she said.

“I think that’s the core lesson about education; it can help you figure out what your path is going to be,” she said. “I was never a stellar student until I went to law school, and that’s when it really clicked for me.”

In 2012, she became the first woman chosen by her colleagues to serve as Democratic leader in the state Senate. That year, she bolstered a reputation as a fighter during the battle over “Right to Work” legislation.

Strongly opposed to the attack on organized labor in the birthplace of unionism, Whitmer crashed a closed Snyder press conference after he stopped returning her calls to explain his sudden turnabout on the issue.

“What he was doing was wrong and cowardly,” she said. “Again the DeVos family played a big role in what happened, and despite the fact that thousands and thousands of people from across the state came to the Capitol, the Republicans tried to block them out.”

Whitmer also voted against the law to allow the state to deduct 3 percent of school employees’ pay to fund retiree health care. Last December the law was declared unconstitutional by the state Supreme Court after a nearly eight-year legal fight by MEA, AFT Michigan and AFSCME.

She summed up multiple appeals of lower court rulings by Snyder and Attorney General Bill Schuette—now a Republican candidate for governor—as part of a political philosophy: “Wear the little guy down, and then you can do anything you want.”

That is why the union matters, she says. And it’s why this election is vital.

“One of the things we can do to empower school employees is elect a governor who’s not beholden to the DeVos family,” she said, “a governor who understands how critical the educator’s voice is in creating the best policies around our schools.”