How Long Can We Take Educators for Granted? 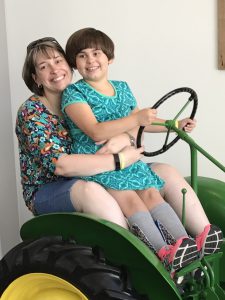 Sarah Foster teaches eighth-grade math in Fenton. In her spare time, she coaches her daughter’s team in a creative problem-solving program, Odyssey of the Mind.

Sarah Foster easily spends $500 out-of-pocket every year buying supplies and teaching materials for her students at Andrew G. Schmidt Middle School in Fenton. “So do the other 39 other teachers here; we all do it,” the eighth-grade math teacher says.

They do it because they care. Because they hope kids will feel safe and loved in their classrooms. Because they want to give kids the best shot at learning. Because children – especially at-risk students – should not have to go without at school.

“I teach kids who are mostly at-risk, and I would rather take the money out of my own pocket to give them those hands-on experiences that will maybe make a difference in their learning than to go without,” Foster said.

She and her colleagues in Fenton are not outliers. A recent online survey of MEA members showed 96 percent spent some of their own money to do their jobs in 2017. Nearly three-quarters of them – 73 percent – reported spending more than $300 per year.

But the wear on educators is showing, and policymakers aren’t paying attention.

As one example, Republicans in Congress today are attempting to fast-track a massive tax overhaul that economists say mostly benefits the wealthiest Americans.

Exact details of the latest plan have not been made available, even though a vote could happen as soon as Monday. The package most recently passed includes elimination of State and Local Tax (SALT) deductions that could force downward pressure on state education spending.

NEA released a state-by-state breakdown of education funding cuts likely to occur if the SALT deductions go away. In Michigan, the estimates stand at $5 billion over 10 years.

That would come on the heels of a decade of declining investment in education, according to a report released last month by the Center on Budget and Policy Priorities, “A Punishing Decade for School Funding.”

In Michigan over that time, school employees have endured falling or stagnating pay while a Republican law passed in 2011 forced educators to shoulder enormous increases in health care premiums and deductibles. As a result, many of Michigan’s educators have experienced falling take-home pay over the past several years.

As supply budgets have shrunk, teachers and support staff have continued spending their personal money on pens and pencils, paper, books, highlighters, art supplies, printer ink, and binders – even furniture, snacks, clothing, and cleaning supplies. The list is endless.

Even so, congressional tax plans have included an elimination of the Educator Expense Tax Deduction, used by many teachers to claim up to $250 in classroom spending if they itemize their taxes.

It’s not a huge benefit, Foster says, but the deduction represents one small way to show appreciation for teachers. Getting rid of it, she adds, is “just another slap in the face.”

Something has to change.

A report issued by the Michigan Department of Education (MDE) in September showed a 62 percent decline in teaching certificates issued in the state since 2004. Enrollments in colleges of education have plummeted.

While not exploring in-depth the question of why fewer people are entering the profession, the MDE analysis does point to new laws passed since 2010 as possible culprits: “In a short amount of time, teachers experienced significant new threats to their job security (via evaluation, school reform models requiring staff turnover, and loss of tenure protections) paired with a decline in compensation and benefits.”

Even dedicated teachers like Foster are questioning how long they can continue to work in a hostile environment.

The daughter and granddaughter of teachers, Foster always figured she would be a 40-year career educator like her dad. But at 16 years in, she’s less than halfway there and doesn’t know if she will last 30 years.

“I honestly can say I don’t think I will be able to withstand the political climate unless things change drastically, and it’s sad because teaching is the only thing I’ve ever wanted to do since I could walk and talk,” she said.

Read more about the MEA survey, and what you can do to stop the damaging tax overhaul.

A Message From a Mid-Career Teacher in Michigan
June 24, 2019