Marquette Custodian a “Pillar” of his School

When Steve Croschere heard that some attention-challenged students at Bothwell Middle School in Marquette needed standing desks to help them learn, he quietly set about making some. 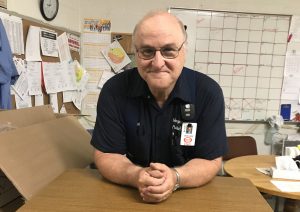 The school had been turned down for grant money to buy the expensive pieces of furniture, so the head custodian dug through old student desks cast off in various corners of district storage areas, rebuilt broken parts, and welded on leg extensions.

“They’re not the most beautiful things, but they’re super effective, and they give our kids exactly what they needed,” said Lesley Addison, a guidance counselor at the school. “Now we have upwards of 15 standing desks, and it’s because Steve took it upon himself to cobble something together for us.”

For his skillful and caring dedication to his work and his local union, Croschere has been honored with MEA’s top award for Education Support Professionals (ESP). Addison nominated him for the Leon A. Brunner Award, which recognizes support professionals who exhibit commitment to their union and advocacy for members and ESP careers.

“Steve has the ability to see what needs to be done without someone having to ask, and he’s very good at taking care of people,” Addison said. “He’s a humble man, and a kind man. He is very much that stable base for us, because he goes above and beyond what others would have done.”

Croschere brought skills as a former union carpenter and a 25-year volunteer Emergency Medical Technician when he started in the district as a custodian and bus driver 20 years ago. He approaches his job simply – always looking for ways to help.

“If I can do something to make a teacher’s life better or an administrator’s job easier, then I think I’m doing my job,” he said. “I try to do what I can do, that’s all.”

Croschere is always ready with a friendly gesture or funny joke, Addison said. He arranges the cafeteria in a way to protect students with food allergies but also to encourage students to interact with each other, she said.

In the winter, when Addison’s office is cold, he arrives early to open her door and warm up the room. He remodeled a reception area in the front of the building into an office. He’s constantly fixing and building shelves. And he serves on the building’s emergency response team.

“He doesn’t make a big deal of it, but he sets a tone that makes other people want to do better because he is such a pillar,” Addison said.

Croschere credits mentors and co-workers for helping him understand the most important part of his job: “I’ve been very fortunate to learn that how you deal with people is the big thing.”

He describes himself as “a strong union guy” who comes from a line of railroad men involved in the struggle to organize workers. As president of his local union, Croschere led a successful fight against privatization plans in the district six years ago.

His approach was to show district administrators and board members that in-house employees give more bang for the buck. It’s also the message he gives to new hires: Show what you have to offer, and do good work every day.

“That’s what I try to teach the new people coming in,” he said. “Do your job and do a little bit extra. It’s just the way I was raised.”