Four MEA members were honored at the 2017 MEA Awards for Human Rights & Excellence for their inspiring activism and dedication to craft. “We are so far from being finished with all of these movements,” said one. “I’ll keep going as long as I have energy.” 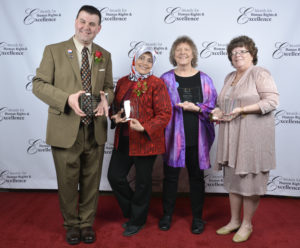 When Jane Cassady began teaching in 1968, female educators couldn’t wear pants – only dresses or skirts. At that time, only one woman served in the U.S. Senate. We’ve come a long way,  thanks to activists like her.

Cassady has been involved in the important civil rights struggles of our time. Racial equality. LGBTQ rights. Anti-war demonstrations. Environmental justice. And, of course, women’s rights.

Her “defining moment” came at the age of 18, when she participated in protest marches in Selma and Montgomery, Alabama – some of which turned violent.

“I was 18, and so naïve that I had no idea people could actually hate each other,” she says. “It set me in a direction I was already going in, but it made the commitment that much deeper.”

Cassady served as a school social worker and MEA UniServ director. She worked for passage of the Equal Rights Amendment and rallied outside of the Republican National Convention in Detroit in 1980.

And she’s still at it in retirement – participating in marches for justice and civil rights. Now she’s hopeful the young people will step up to take over. “We are so far from being finished with all of these movements,” she says. “I’ll keep going as long as I have energy.”

Whether she’s publishing research, presenting findings at a conference, or teaching educational leadership courses at Central Michigan University, Dr. Hozien infuses her work with individuals’ compelling stories that bring to light the struggles and value of diversity.

Giving voice to under-represented groups empowers them and also reveals the way forward for educators who want to improve their own cultural competencies. “Social change begins with the Educator creating a better world for all students,” she says.

Dr. Hozien has researched the public schooling experiences of Muslim girls for the past six years. She studies the leadership styles of African American principals. Her upcoming book focuses on under-represented students, including LGBTQ children and other cultural minorities.

She says, “My mantra is this: “Recognize any biases or stereotypes you may have absorbed. Treat each student as an individual, and respect each student for who he or she is. Rectify any language patterns or case examples that exclude or demean any groups. Create a climate in your classroom that is accepting, regardless of ethnicity, race, gender, sexual orientation, etc.

Frank Burger found his voice early in his career.

During his second year teaching, Burger spoke up in support of other new teachers facing unfair criticism from their district superintendent. After voicing his concerns at a school board meeting, colleagues encouraged him to run for an open seat as association vice-president.

Burger won, and he’s been an advocate for social justice ever since. “I don’t let fear rule me,” he says.

The president of Carman-Ainsworth Education Association, Burger now serves as the Male Co-Chair for NEA’s Gay, Lesbian, Bisexual, and Transgender Caucus. He is part of NEA training cadres in Social Justice, LGBTQ Issues in Education, and Cultural Competency.

Several years ago, Burger stepped up to testify in support of a teacher in a neighboring community who was disciplined for protecting the rights of a transgender student. In 2011, his political activism aided in the successful recall of Rep. Paul Scott, a state lawmaker known for attacking teacher rights and disparaging LGBTQ advocates.

As the Trump administration has begun to roll back advances made in equal treatment and protections for LGBTQ people, Burger has only become more determined, he says.

“I won’t be treated like a second-class citizen,” he says. “I’m a citizen of the United States of America, and I expect to have equal rights under the law.”

A simple philosophy has driven Mary Anne Campbell’s work as an elementary special education teacher since 1982: “All kids are kids first,” she says. “Some don’t have a straight path to learning, but all kids can learn.”

According to colleagues, she lives that philosophy with contagious passion, heart, and positivity.

For the past 16 years, she has organized the Royal Oak district’s Disability Awareness Workshop – a set of activities and work stations allowing general education students to experience learning and physical differences that their special education peers live every day.

Students explore what it’s like to experience autism, speech and language difficulties, fine and gross motor issues, and learning difficulties. They also try using adaptive equipment, such as prosthetics and wheelchairs.

“The goal is to build some empathy among same-age peers,” she says.

Campbell informally mentors colleagues who draw on her years of expertise in teaching, managing severe behavior problems, and addressing the needs of students with cognitive impairments.

An expert in Touch Math, Read Live (Read Naturally), and the multi-sensory Orton-Gillingham approach to reading for students with learning difficulties, among other programs, Campbell combines knowledge with compassion and understanding of students’ needs and motivations.

“I love working with kids and helping them succeed and grow and learn,” she says.