For many years Richard Hale never spoke to his family about his combat experiences as a Marine Corps infantryman in the Vietnam War. He didn’t visit the Vietnam War Memorial in Washington, D.C., until last October – nearly 50 years after his return home. 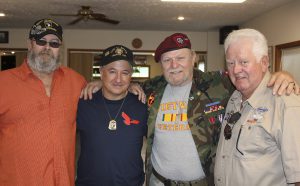 History teacher John Moran, second from left, poses with some of the veterans who attended the recent 30th anniversary Vietnam Veterans Roundtable with students from Charlotte High School.

Hale carried the weight of those memories alone, speaking of them only occasionally with other veterans of the conflict, until his daughter’s high school history teacher – MEA member John Moran – changed everything 13 years ago.

In 2006 Hale’s daughter convinced him to participate in a unique “roundtable” event organized by Moran that brings Vietnam veterans together with Charlotte High School (CHS) students for face-to-face talks about what it was like to serve in the war. He’s been returning ever since.

“That first roundtable I came to was the first time, other than my immediate family, that anybody shook my hand and said, ‘Thank you; welcome home,’” Hale said. “Coming here has helped me to open up and talk about what happened—to not be as guarded about it.”

Extending a homecoming to troops who fought one of America’s most controversial and difficult wars was the purpose of the first roundtable Moran organized in 1989. “I felt they were treated badly when they came back, and I was going to do something about it,” the history teacher said.

This year’s program, including a taco dinner at the Charlotte VFW hall on the Friday before Memorial Day, marked the 30th anniversary of the Vietnam Veterans Roundtable. “It’s been a good run,” Moran said.

The earliest roundtable events happened in Moran’s classroom. As word spread and student interest grew, the program was moved to the school’s library for many years. Three years ago, it landed at the hall that houses the local Veterans of Foreign Wars post.

Along with open conversation, a new elective class at the high school grew out of the roundtable events. For the past 20 years, Moran – referred to by students and veterans alike as “Johnny Mo” – has taught a popular course on the Vietnam War and its historical and cultural underpinnings.

Students describe his knowledge of the war as encyclopedic, but his ability to place events in a larger political and societal context is what makes Moran’s “Lessons of the Vietnam War” course so fascinating, said senior Isobel Beebe, who attended this year’s roundtable.

“I wanted to take the class knowing he felt strongly about the subject, and knowing I was going to cry more than once, and it was an amazing experience,” Beebe said.

At Friday’s roundtable, a few dozen students listened attentively as about 20 veterans introduced themselves and a bit of their stories during a panel discussion. Afterward participants broke up into small groups for more in-depth conversation.

Navy veteran Donald Tyler showed up despite a recent three-month hospital stay following a bad fall. “I wouldn’t want to miss it,” he said.

Tyler reveled in sharing the flashier details of his Vietnam tour, which started in 1965: being commanded by Heisman Trophy winner Roger Staubach who graduated from the U.S. Naval Academy and had just been signed to a pro football contract by the Dallas Cowboys; dancing with movie star Ann Margret on stage during a USO show.

He concluded with a grim statistic: 87 members of his graduating class of 386 students did not make it home from Vietnam. Still, he said, “If somebody asked me, I’d go again in a minute.”

Some of the veterans told vivid stories of doing their jobs – as pilots, rangers, truck drivers and more – under fire or in combat. “If you were on the river boats over there you kind of knew what a duck felt like in a shooting gallery,” said Jerry Taylor, who worked as a river corpsman.

Many spoke of the injuries they suffered, the losses they witnessed, and the emotional pain they endured. Many have dealt with health problems related to the military’s use of the defoliant known as Agent Orange. Several spoke of their Post-Traumatic Stress Disorder (PTSD) and the lack of support they experienced upon returning home.

CHS senior Trenton Dowling participated in the roundtable just before reporting for duty in the U.S. Navy. The soon-to-be graduate always had an interest in the military; for his Eagle Scout project, he built a memorial at CHS to alumni who died in every war since World War I.

Meeting with the Vietnam veterans was a powerful finish to Moran’s class, the school year, and his high school career, Dowling said.

“It’s crazy to think about all they went through, and I’ll probably never understand it completely,” he said.

Moran started last Friday’s program by praising his students for their efforts to support veterans outside of the classroom, including selling flowers to raise money for the Veterans Relief Fund and writing more than 1,000 cards to active-duty service members for Valentine’s Day.

One student from Moran’s class competed in a local entrepreneurship challenge with a plan to sell t-shirts and water bottles she created to honor veterans. Junior Alyssa Davis used her second place cash prize to buy materials, and her project is expected to net $1,000 to benefit the Veterans Administration hospital in Battle Creek.

The students’ efforts reflect how the purpose of the Vietnam Veterans Roundtable has evolved over the years, Moran said.

“It’s primarily historical now,” he said. “The veterans who’ve been coming all these years are pretty much healed. They’re feeling honored. Now it’s about passing the torch to the next generation.”