It’s an interesting juxtaposition to note that the K-12 school where MEA member Marvin Nordeen works as a psychologist is housed in what was once part of the Traverse City Regional Psychiatric Hospital. 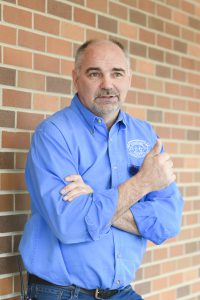 School Psychologist Marvin Nordeen says clarification and guidance is needed on the state’s new Seclusion and Restraint law. Educators in many schools say confusion about the law has led to disruption and frequent classroom evacuations due to one student’s out-of-control behavior.

New Campus School—run by the Traverse Bay Area Intermediate School District (TBAISD)—is nestled on the edge of a sprawling compound of striking Victorian-styled buildings built in the 1880s as the Northern Michigan Asylum, now listed on the U.S. Register of Historic Places.

At one time Traverse City’s state-run psychiatric hospital was on the cutting edge of treatment for the mentally ill. The facility’s first superintendent, Dr. James Munson, believed in the therapeutic qualities of beauty and kindness. Restraints such as straitjackets were forbidden.

Now the long-shuttered 63-acre hospital, rumored to be one of Michigan’s most haunted places, is undergoing redevelopment into upscale condos, shops, wineries, restaurants, and offices—along with the TBAISD’s school and meeting spaces.

Forty years ago a paradigm shift was made away from mental hospitals toward home care and community-based mental health services for people with mental illness—a valiant goal that unfortunately led to ongoing problems with lack of care and homelessness among that population.

The fact is even well-meaning policy changes can have unintended negative consequences in how they’re designed and implemented—and that is where School Psychologist Marvin Nordeen comes in.

He and others contend that the implementation of Michigan’s new law limiting the use of seclusion and restraint, though well-intentioned, is creating confusion and disruption in many schools across the state. The law, passed in 2016 and implemented last fall, needs clarification and direct guidance, experts say.

“I testified in front of the House Education Committee in support of the bill, but also about our concerns of where it could take some bad turns, and how it could become more dangerous rather than less dangerous for both kids and staff,” said Nordeen, who spoke before lawmakers at the time as president of the Michigan Association of School Psychologists.

From schools all over, staff are reporting similar “bad turns” implementation of the law has taken: Kids wandering the school without permission as a paraeducator follows behind. Students destroying property. Entire classrooms being evacuated to accommodate one out-of-control student multiple times per week. In some cases, staff injuries have been reported.

Several educators said they were required to watch a video to satisfy the law’s training requirements. In the video, a legal firm advised staff members they couldn’t physically touch a child to redirect or guide—no touch outside of an emergency was allowed.

The training video reportedly said school employees could only touch a child if he were about to jump in front of a car—or in equivalent danger—and the touch could only last long enough to move him out of the immediate danger.

As a result, in one Garden City elementary building, a new-to-the-school youngster—eventually identified as Emotionally Impaired (EI)—pushed the boundaries in his general education classroom, said Patti Stanchina, local president and special education teacher at the school.

“He was avoiding work, running around the room, throwing chairs, getting physically aggressive and tearing things off the walls—and then he would just laugh and run into the music room,” Stanchina said. “He knew we couldn’t touch him.”

Another student being evaluated for EI classification for aggressive behavior and talk of self-harm told his teacher, “I can do whatever I want, because you can’t touch me,” Stanchina said.

That story is echoed among many educators grappling with this issue. The frustration and helplessness of staff at her school led Stanchina to become a certified trainer in de-escalation techniques and proper use of seclusion and restraint, she said.

The idea that students can never be touched is not true—but it’s a widespread misconception of school employees reporting problems. The law does not prohibit all guiding touches as “restraint,” nor is use of seclusion literally banned, Nordeen said. 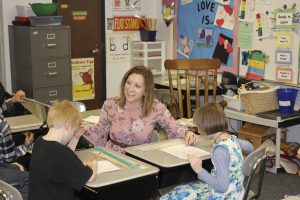 Patti Stanchina, local president in Garden City, says frustration among staff at her school led her last fall to become a certified trainer in de-escalation techniques and proper use of seclusion and restraint.

The law was pushed by Lt. Gov. Brian Calley—who has a daughter with autism—and other parent advocates concerned about “non-emergency” use of restraint and seclusion on all students but especially those with emotional or behavioral disorders—practices he terms “barbaric.”

Reached for comment on this story, Calley said in a written statement that confusion around the law stems from “inaccurate and erroneous legal advice” schools are receiving. He advised school officials to read the law, policy, and guidance issued by the Michigan Department of Education (MDE).

In addition, Calley added, “We are working with the Michigan Department of Education to create additional guidance and to combat the inaccurate information being spread and to support proper implementation of the restraint and seclusion law.”

Under the legislation, seclusion and restraint are only allowed to be used as a last resort in an “emergency situation”—defined as behavior that poses “imminent risk” to self or others. Any other use of restraint or seclusion is prohibited by the law.

“When people say things like restraint and seclusion are banned or outlawed. Period. Well, no, they’re not,” Nordeen said. “You can say that all you want, but they’re not banned because we still have a duty to protect children when they come through our school doors.”

Nordeen is an expert on the subject. He works with kids of all ages who have severe behavior issues at New Campus School, a separate facility that draws the most challenging special education students referred from schools in a five-county area.

“The training is intended to minimize the use of restraints and seclusion,” he said. “And if you have no other choice and you have to do it, it teaches you how to do it as minimally as possible while maintaining safety and dignity for the child.”

Amy Maeder, president of the paraprofessionals unit in TBAISD, attended a recent CPI retraining to help in her work with young adults who have cognitive impairments.

“It does work; it teaches you how to pick your battles and resolve problems before they get worse, and that’s something all of us humans need to learn how to do,” said Maeder.

The new law requires school employees to contact the parent immediately and document each time they use seclusion or restraint in a four-page report to the MDE.

Except for the addition of significant new paperwork, Calley’s new law did not significantly stray from MDE policy guidance on the subject, which had been around since 2006 and most school districts already followed.

However, it created conflict between state and federal definitions of terms and between state statutes, Nordeen and others contend. For example, Michigan’s corporal punishment law allows physical restraint to stop damage to property, while the seclusion and restraint law prohibits it.

Even so, special education teachers and support staff who’ve undergone CPI training for years generally understand the law’s requirements. It is the staff who work in general education classrooms—where students with behavioral problems might spend part or all of the day—who are not as well-versed, says Rosemarie Smith, a school psychologist in Farmington.

“Once you do awareness training with every staff member, and you have an elementary music teacher who’s never worked with a student like this, they’re terrified,” Smith said. “They want to know, ‘What does this mean? Can I not hold a kid’s hand walking down the hall?’”

Definitions of words such as “emergency” and “imminent”—and even “restraint” and “seclusion”—become more sharply debated when the word “prohibited” is also included in the law, raising the specter of legal repercussions for wrong interpretations.

“Nobody wants to be the case law that determines how this is actually applied,” added Smith, who works half-time as an elementary school psychologist and half-time in an administrative role that includes helping to implement the law in Farmington.

Everyone agrees seclusion and restraint should be used as a last resort. The problems seem to stem from a few common issues, including uncertainty about the meaning of terms, but also inadequate staff training and lack of planning or communication from school administrators.

Amy Kapala, a Romulus special education teacher, said she and a few others in her district are trained in CPI and attended a three-hour session on the new law through a local ISD. But her district has not adopted a required implementation plan, which her MEA local has questioned.

“I’m concerned about somebody getting into a situation and restraining a child and not having backup from central office,” Kapala said.

The law’s intent is to reduce students’ challenging behavior, in turn reducing the use of seclusion and restraint, by requiring schools to adopt Positive Behavioral Intervention Supports (PBIS), eliminating suspensions through restorative justice, and practicing “trauma-informed care.”

Another big problem—as often occurs in state mandates—is that funding didn’t follow, Kapala said: “They want schools to look at climate and what they’re doing, but that requires resources. It requires professional development for staff and it also requires human resources—people. 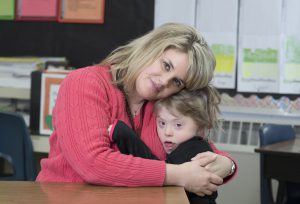 Kate Foster-Dupuis, a veteran special education teacher, says she sees the issue from both sides as a mom of a special-needs child. But she worries about the law’s unintended consequences.

Amy Kwiatkoski, a special education teacher who this year started working in the tiny DeTour school district on Drummond Island in Chippewa County, agreed this issue is a hot topic among educators around the state. She has worked in medium and large districts as well, she said.

From concerns she is hearing from colleagues across Michigan, she said, “I can see a lawsuit in waiting if a student gets hit with something like a stapler that’s being thrown, and then what are we going to do?”

Kwiatkoski assists general education teachers if a student has a melt-down and needs time and space to cool off. She invites those students to her room where there is a therapy swing, bubbles to blow (which forces the student to breathe deeply), and a trampoline and other soft objects.

“I’m the first special ed teacher they’ve had on the island. When I told them we needed a room with tools we can use to help in these situations, my administration quickly got on board.”

Having an in-school support room where disruptive students can go after other interventions have failed is key, says Kate Foster-Dupuis, a special education teacher who has worked with students in EI classrooms for 17 years in Carrollton.

And for some of those students, having a safe and comfortable room where they can remain secluded while coming out of an emotional melt-down is also important, Foster-Dupuis said.

She is concerned about a potential unintended consequence of the law’s implementation: heightened involvement of police in handling severe behavior issues. Legislators passed an additional measure in January exempting police officers from the law’s requirements.

And she worries the law takes away parents’ ability to consent to coping strategies that work—an issue she sees from both sides, because she’s Mom to a daughter who has Down Syndrome and has a propensity to “run” at school. She wants staff to be able to physically redirect her, she said.“Children who have emotional issues or behavioral types of disorders, how they’re dealt with should be determined by the IEP (Individualized Education Program) team and that parent,” Foster-Dupuis said.

Now a committee of teachers, support staff, and administrators will consider changing how they approach and respond to difficult behaviors, including mindfulness and redirection rooms, Hall said. Just the fact that all sides are meeting has given people hope, he added.

“The number-one concern of our staff members is to make sure all students and staff are safe,” Hall said.

In Memory of an Innovator
October 15, 2019
Recent Articles
Archives