Several students from Ann Arbor’s Skyline High School recently demonstrated a grasp on how to resolve conflict that many adults could learn from. 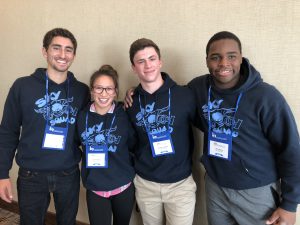 Omar, Zain, Rollie, and Arik – members of the Skysquad team – presented at the World Conference of the International Institute for Restorative Practices.

In fact, the teenagers did teach their elders in October when four representatives from Skysquad—a student-led restorative justice team—presented at an international conference in Detroit attended by professionals from all over the world.

“We focus on building relationships and making sure everyone’s voice is heard, because that is the community we want at Skyline,” said senior Omar Hassan, a soccer player who says the humbling experience of being part of the team has awakened his passion for helping others.

About 20 students participate in Skysquad each year since the program started in 2013, mentoring struggling freshmen and mediating conflicts in “circles” based on Native American peacemaking traditions—without an adult in the room.

A counselor is stationed just outside in case participants reveal abuse or thoughts of harming self or others. Strict confidentiality is enforced.

The students receive extensive training and practice to draw out all sides of a conflict and help people see different perspectives, said senior Arik Rorie, a football player and self-described jokester who said his experience on the team has broadened his view of the world.

“Sometimes because we’re angry we can’t see the other side of a situation, and we think we are right,” Arik said. “In Skysquad we promote understanding of other perspectives because if you don’t know somebody else’s truth, then you’ll never get to a solution.”

To do that work, a broad variety of students are selected for Skysquad, including some who have found themselves in trouble in the past, said senior Rollie Caswell, a football player who said he has developed more empathy from participating in the program. Skysquad members interview and select candidates and help train incoming members.

“It’s not about having all straight-A students on the team,” Rollie said. “You want to have a representative group of students because that is how we’re able to be a go-between, between our student body and our principals.”

“One thing I’ve learned doing this work is the problem that started the argument is almost never the real problem,” Arik said. “There’s always something deeper.”

The five-year-old program has led to a change in culture and climate at the school, the students said. Fights in the hallways and cafeteria that happened routinely four years ago are rare nowadays, they agreed. More people speak up when they hear insensitive jokes or comments.

“I had a great thing happen last year—this girl came to me and said, ‘Arik. I’m about to fight someone. Please take me to the office.’”

Mentoring freshmen in need helps on the front-end, said senior Zain Smith, a state champion diver who says she loves people and hugs. “We get to know them, check in with grades and things at home; we spend time earning trust, and that prevents problems from arising.”

Skysquad members do not force anyone to take part in a circle, nor do they tell people what to think. “We’re not telling the students this other person is hurt; you should feel this way,” Rollie said. “You have to let them figure it out for themselves, and that’s why circles are so powerful.”