Social Justice: ‘Do Your Part However You Can’ 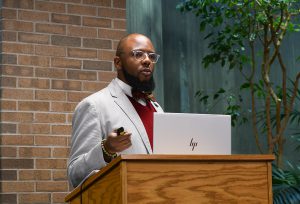 “We have to call a thing a thing,” says Dr. Chezare Warren, a researcher and faculty member at MSU, who asked conference participants to stand up to systemic racism and oppression.

There is no neutral ground when it comes to issues of systemic racism and oppression—everyone must take a stance, according to Dr. Chezare Warren, a former teacher and administrator in Chicago Public Schools, now a faculty member at Michigan State University.

“Life and death consequences are associated with our capacity to hold space, love, care for, and think about being in community with those who are marginalized for lots of different reasons,” the author and researcher said. “To be neutral is to provide tacit agreement with issues of injustice as they continue to proliferate in our country.”

“We have to call a thing a thing,” Warren said in his opening keynote address, quoting author and spiritual advisor Iyanla Vanzant in a turn of phrase that became a mantra echoing through the conference.

Local MEA leaders and staff from several units in the Capital-area region organized The Power of You: Impacting Social Justice conference to encourage honest dialogue that leads to action and change, said LSEA President Chuck Alberts. Participants came from all over Michigan.

To be effective in encouraging children to learn and grow, educators must seek to understand and honor students’ experiences and perspectives, said conference presenter Shon Hart, a Flint author, speaker, and director of a non-profit dedicated to empowering African-American fathers. 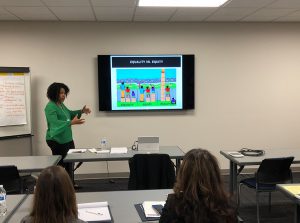 Dr. Dorinda Carter Andrews, assistant dean of Equity Outreach Initiatives for the College of Education at Michigan State University, discusses the differences between equality, equity, and justice at an inaugural social justice conference co-sponsored by MEA and a local association.

Broken boys might appear at school as withdrawn and unmotivated, or they could act out and challenge authority, Hart said in a riveting talk that occasionally sparked spontaneous cheers and applause.

“Speak to his potential,” Hart said. “Listen and give him value. Speak to the king in him, and he will rise.”

Lansing educator Jami Brown attended the conference as part of a one-year administrator apprenticeship program she is involved in this year. She chose sessions carefully, because there were many speakers she wanted to hear from, she said.

“As the mother of three African-American sons myself, I want to know how I can prepare them for the future ahead, as well as students and educators—how can we bring forward the idea of being culturally sensitive and responsive?”

Cari Cravotta, an elementary music teacher in East Lansing, said she couldn’t wait to report back from the conference to faculty at her school. Cravotta belongs to her building’s equity team developing means and methods for creating an open, accepting, inclusive community.

“These are the things that people don’t want to talk about that we need to be talking about,” Cravotta said. “Equity is so important. I think all teachers need to learn more about it.”

There is a difference between equality and equity, noted Dr. Dorinda Carter Andrews, assistant dean of Equity Outreach Initiatives for the College of Education and associate professor in the Department of Teacher Education at Michigan State University.

Carter Andrews delivered the event’s closing keynote address and also presented a session on culturally responsive teaching that acknowledged the terms have become ill-defined buzzwords. Equality works if need is the same, she said. Equity ensures access to opportunity.

However, she added, “Justice is liberatory; it is freedom. Justice is an ongoing struggle. As long as we live in a world where injustice and inequality exist—and privilege and disadvantage—we will be working for justice.”

Schools should not be asked to solve these issues alone, she said. All of society’s institutions should be working together, but change can begin with individual awareness and reflection. Discussing issues and making curricula more inclusive are good places to start.

“Don’t facilitate a dialogue you don’t feel comfortable facilitating, but it doesn’t take much to let a child know I love you and you are safe here. Do your part however you can do it, but don’t do nothing.”

Several non-profit organizations operated vendor booths at the conference to connect participants to resources. The conference was eight months in the making, and organizers hope to continue the work with future events and further coalition-building.

“It’s a good start, but it’s just that—a start,” said Ron Parkinson, a Capital-area UniServ director among many who pitched in to plan the conference with grant money from NEA and MEA, adding that organizers hope the event will continue to broaden its reach going forward.