Beginning Sept. 1, Paula Herbart will serve as the new President of the Michigan Education Association. 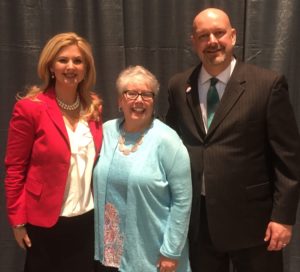 “I’m honored and humbled to have the faith and support of my fellow MEA members to lead this organization over the coming years,” said Herbart, a music teacher from Fraser.  “Michigan school employees deserve to have a voice in what’s best for their students and their careers. I will do everything in my power to make those voices heard in local school districts, Lansing and Washington.”

In his final speech before more than 500 delegates, Cook said the new officers face difficult challenges from lawmakers who want to weaken MEA in the hopes of further privatizing and charterizing public education. But we’re still here – and united we’re the strongest advocates for supports for educators and the quality schools every child deserves, he said.

“The stakes are too high not to leave this RA as united and together as never before,” Cook said. “We can’t afford to do anything less.”

MEA’s current Vice President Nancy Strachan is also retiring at the end of August, along with Cook. Current Secretary-Treasurer Rick Trainor will be returning to his position as a teacher in Mt. Pleasant.

“I and the new team of officers want to thank our current officers for their dedicated service during challenging times,” Herbart said.  “In particular, I want to thank President Cook for his leadership of our union, not only during the past six years but throughout his distinguished 26-year career as an MEA officer – the longest tenured officer of any NEA state affiliate in the country.”

In other action, RA delegates approved four New Business Items, including a proposal to add recycling containers at meeting and eating spaces at MEA headquarters; to establish a New Member Taskforce to look at ways to attract and involve new educators in the union; to study the possibility of reducing the Spring RA to one day instead of two; and to require a written report at each RA detailing the status of merger discussions between MEA and AFT Michigan.