Induction into the Hall of Fame for any profession implies a long list of achievements by the honoree. 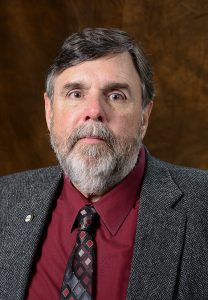 That’s certainly true of Drew Campbell, a Waterford custodian and union leader recently named to the MEA ESP Hall of Fame. But Campbell is more than his resume of accomplishments, according to Jim Sparapani, who heads MEA’s awards committee for Education Support Professionals.

Campbell is known for his extensive anti-privatization work across Michigan and the U.S., but his guiding philosophy is what sets him apart: Members come first.

“He’s the type of person who goes over and above what anyone would normally do,” Sparapani said. “If they called Drew tomorrow and said, ‘We need you in Ironwood,’ Drew would be there. Drew would drop whatever he was doing and do whatever he could.”

Campbell says he learned union values from his grandfather, a crane operator, and his father, a steamfitter. “I remember the union values they taught me—these are your brothers and sisters; they need help, you drop what you’re doing and go.”

And go he did.

Campbell has fought privatization efforts in his own backyard and in districts across the state – “scolding school boards,” he says – as an original member and leader of the Statewide Anti-Privatization Committee (SWAP).

Eventually MEA’s SWAP team spawned an NEA privatization cadre, with Campbell and others taking materials they developed for swaying school boards on the issue to prepare people at  conferences all over the country.

Knowing he has trained thousands of ESP members and leaders in dozens of places is rewarding – especially given the fact that Campbell is retiring this summer.

“What really touches me is to see people training others and using the materials that a small group of us put together originally,” he said. “We haven’t always won those fights, but we have a 60 percent success rate. That’s a lot of jobs saved.”

A former local leader and MEA and NEA board member, Campbell steps down soon from his leadership of the ESP Caucus Executive Board knowing the fight will continue for those who step up to leadership in the ESP arena.