Whitmer: An Advocate for Public Education

High school educator Jill Laurin-Maxwell had a special guest tagging along when she went shopping for school supplies this year.

The sign language teacher took gubernatorial candidate Gretchen Whitmer with her to buy tissues, paper, pencils, Sharpies, paper clips, binders and lotion—an $84 excursion that Laurin-Maxwell said was the start of classroom spending likely to top out at $400 for the year. 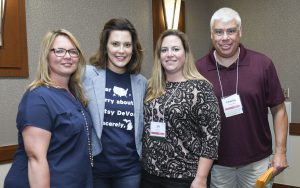 “She wanted to know what I was going through,” said Laurin-Maxwell, president of the Northwest Education Association in Jackson County. “I was happy for public education—happy for my colleagues—that a candidate cared enough to listen. It was very touching and uplifting.”

At the outset of a video of the shopping trip, Laurin-Maxwell tells Whitmer: “If my students throw out their binders at the end of the year, I pull them out of the trash if they’re not bad.”

Whitmer noted that Laurin-Maxwell’s experience is not unique: “It shouldn’t be on teachers to get the supplies that students need to be successful. But here we are, because we don’t have leaders who are supporting the work that is so important that is happening every day in our schools.”

Last year, Laurin-Maxwell spent $85 buying lunch for all of her students so they could go on a field trip related to a unit on courts. She shelled out nearly $200 for a fresco art project related to class learning on hearing-impaired artists, which students look forward to doing, she said.

“Our legislators expanded the evaluation system, but they don’t want to pay for teachers to make their classrooms more innovative,” Laurin-Maxwell said.

The shopping trip was not the first time Laurin-Maxwell felt heard by Whitmer. She was at the state Capitol in 2012 when Republican leaders rushed passage of so-called “right to work” legislation without hearings—locking the building at one point with 12,000 protesting outside.

Laurin-Maxwell recalls Whitmer—then Senate Democratic leader—coming outside with other legislators to talk with the protesters. “She listened to us back then, educators, auto workers, SEIU members. I knew it was real then.”

Whitmer proudly notes a lifelong history with public education. She is the daughter and granddaughter of educators, the product of public schools in Michigan, and the mother of two teenage daughters attending East Lansing Public Schools.

“A generation ago, Michigan led the world in public education,” Whitmer notes in her education plan. “This was the state families packed up and moved to because parents knew their children could get a quality education and the skills they needed to get a good-paying job.”

Her education plan, Get it Done: Better Schools Now for Michigan Students, focuses on stabilizing school funding, improving compensation and working conditions for school employees, phasing in universal preschool, and investing in wraparound services through partnerships and increased counselors, social workers, and psychologists.

“Education shouldn’t be a partisan issue, but Republicans in Lansing have consistently sided with Betsy DeVos to push an education agenda that includes slashing school funding, expanding unaccountable for-profit charter schools, over-emphasizing standardized tests, attacking hard-working educators and adopting a one-size-fits-all approach to education,” she wrote in her plan.

Her Republican opponent in the Nov. 6 General Election, term-limited Attorney General Bill Schuette, has taken at least $176,000 in political contributions from DeVos since 2010. Like the Education Secretary, Schuette is a proponent of private school vouchers and charter schools and has referred to DeVos as a “smart and gifted leader in education.”

He recently appealed a judge’s decision blocking $5 million in state funding from going to private schools. A Court of Claims judge last spring said the $5 million allocation for the cost of state safety and health requirements violates the state constitution’s ban on aid to non-public schools.

In contrast, Whitmer voted against the 2010 law that took from current school employees’ paychecks to fund retirees’ health care. She says the multiple legal appeals of the 3 percent case, orchestrated by Schuette through 2016, are part of his political philosophy: “Wear the little guy down, and then you can do anything you want.”

School employees have been disrespected for too long, Whitmer says. “We need to stop attacking educators’ pay, and their benefits, and their ability to determine what’s happening in the classroom.

“This Legislature continues to put forth new law after new law impacting the work schools are doing every single day, and they never even talk to a teacher, a parapro, a cafeteria worker, or any of the people who make up our schools.”

Whitmer supports closing poor-performing charter schools, using the state budget as a pressure point with university authorizers of the charter companies if necessary. Her plan to beef up wraparound services and support in high-need schools would go a long way to ending the proliferation of charters in impoverished urban areas, she says.

Her education plan calls for a weighted school funding formula and for lawmakers to stop taking hundreds of millions of dollars from the School Aid Fund to balance the budget.

“We are underfunding the education of all of our children right now because of the continuous raids on the School Aid Fund,” she said. “If we are going to get our house in order here in Michigan and make this the place our kids stay and others come to for opportunity, we’ve got to fix the continuous assault on education funding in our state.”

A former interim prosecutor in Ingham County, Whitmer served five years in the state House and nine years in the Senate. She was the unanimous pick of MEA’s Statewide Screening & Recommendation Committee, made up of MEA members across the state from diverse backgrounds and roles within the public education community.

Whitmer chose Detroiter Garlin Gilchrist II as her running mate. A former national political organizer, Gilchrist serves as director of University of Michigan’s Center for Social Media Responsibility. He previously worked as director of innovation and emerging technology for the city of Detroit.