This election year Michigan will be a battleground state in a fight that will determine the future direction of public education, U.S. Sen. Gary Peters told attendees at last week’s MEA Winter Conference. 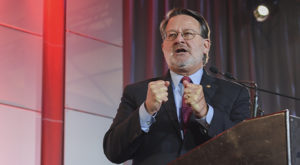 From squandering millions of dollars on charter schools that never opened (as MEA President Paula Herbart wrote about in the Free Press this week) to letting predatory colleges off the hook for defrauding their students, “her policies have ranged from bad to cruel,” he said.

At the conference, MEA announced a continuing recommendation for Peters in his bid for re-election in November.

The son of an MEA member, Peters is committed to investing in quality public schools to create opportunities for students whether they go on to four-year colleges or pursue an occupation through career-technical education.

“Everyone has a different path in life, but it’s our job to ensure every child gets the same opportunity, no matter who they are, and that’s through our public schools,” Peters said.

Peters has represented Michigan in the U.S. Senate since 2015 following six years in Congress and seven years in the state Senate. He previously worked as an investment advisor and rose to the rank of lieutenant commander in the U.S. Navy Reserve after volunteering at age 34.

In his keynote speech last Friday, Peters echoed the farewell address of President George Washington, who warned the fledgling nation to beware of political polarization, which could lead to the rise of a demagogue who inflames people’s dark passions and fears.

“We’re there folks,” he said, rallying the conference crowd to step up to the challenge of redefining America. “That is not who we are; that is not our values.”

Public education is part of his DNA, Peters said. He graduated from Rochester public schools where his father worked as a high school and middle school English and social studies teacher for more than 30 years.

“Even now I will have people come up to me and say, ‘Your father made a difference in my life. I remember – he was my favorite teacher.’ All of you are making a difference in people’s lives, and I thank you for what you do.”