The past three years brought MEA member Elaine Zomberg so close to two special students in her class for cognitively impaired young people that the fourth-year Grand Haven educator invited them to play important roles in her spring wedding.

The COVID-19 pandemic began during Zomberg’s first year running a CI classroom and her second year as a teacher, but she forged strong bonds with students and families through the ongoing challenges.

Last year as Zomberg planned her April wedding, she wanted to have a flower girl and ring bearer in the ceremony and thought of Riley Jo Peltier and Gabe Purdy, 13-year-old classmates who have been like sister and brother since their families met in the Neonatal Intensive Care Unit after their births.

“They were part of my first-ever CI group of kids,” Zomberg said. “That whole group was awesome, but those two – especially when the pandemic hit and having to do virtual learning – I felt like I talked to their families all the time. I had them both as students for two years.”

Zomberg, a 28-year-old former West Ottawa High School and Eastern Michigan University softball standout, made separate visits to the students’ homes to present goodie bags and invite them to be part of her special day.

“Inclusion at its best,” said Liz Hubert, an MEA-member high school guidance secretary in Eaton Rapids and grandmother to ring bearer Gabe, who has Down Syndrome and autism. “It was above and beyond and just so special.”

After learning about wedding rings and ring bearers, Gabe became obsessed with getting down on one knee and proposing even though that wasn’t exactly his job, added Hubert. He even wore his wedding tuxedo to school a few times because he was so excited about playing a role.

“It’s easy to forget that teachers’ jobs don’t start and end when they walk in and out of the building each day,” Hubert said of Zomberg and many other educators she has known during 24 years working in public education. “They’re always invested in students and enriching their lives as a whole.”

Gabe’s mom, Erin Purdy, said the experience was indescribably important for the whole family. “When you have a child with special needs the future is never guaranteed, so the opportunity to have our kiddo in a wedding is huge,” Erin said.

“Even in her wedding party pictures, there’s my buddy proposing in the middle of it all – and she’s just fine with it, because she’s beyond awesome.”

Her son loves being the center of attention and is a “fun kid – just a blast,” Erin added. “He’s had a lot of cards stacked against him, but he enjoys life and reminds us to enjoy the small things.”

Through Zomberg’s advocacy, Gabe has become better able to express himself verbally, according to his mom. During the pandemic, he wasn’t responding to virtual learning, so Zomberg came to his house and taught him one-on-one in the garage while masked and distanced.

Zomberg will forever be known as “Bu-beck” – her maiden name of Whitbeck – by Gabe, now a seventh grader who attends a class for severely multiply impaired students down the hall from her. The boy has asked for his good behavior reward this year to be able to visit Bu-beck.

“That is what educators do,” said Erin – who is also an MEA-member educator in Muskegon. “We spend six hours a day with other people’s kids, and they become an extension of our families. That’s part of why we go into education, and it’s why we love our jobs.”

On the day she invited him to be in her wedding, Zomberg brought Gabe black sunglasses and a water bottle marked “Ring Security” before showing him YouTube videos to help him understand his part.

Knowing Gabe can be a “scene stealer,” Zomberg encouraged him to have fun by wearing his sunglasses down the aisle. She let him ham it up during posed photos of the wedding party, and she arranged a coloring table at the reception with crayons and colored pencils for the youngsters to enjoy. 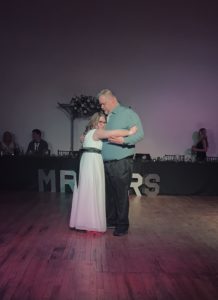 Being flower girl in her teacher’s wedding was just as meaningful for Riley Jo and her family, father Jay Peltier said. Riley is a happy, fun kid with a great sense of humor, and Zomberg is “warm, bubbly, very kind – just beyond awesome.

“One thing Elaine did – and I had no idea about this in advance – was she had Riley pick a song and we had a daddy-daughter dance,” Jay said.

The song was “Lady” by Brett Young, with its chorus that says, “I hope you look just like your mama/ And love her like I do/ You’ll see close to perfect patience/ If you watch her every move.”

“They cleared the dance floor, and I danced with her, and tears were falling down my face,” Jay said.

Zomberg, the daughter of a school-librarian mother and science-teacher father, credits the staff and her co-teachers at White Pines Intermediate School with helping her get through these difficult few years. She never imagined herself doing anything other than teaching children with special needs, she said.

“I love how genuine they are,” she said. “Sometimes it gets hard, especially in this time, and there are days in special ed where you can have behavior issues. But then the next day comes, and that student is the sweetest ever, and you realize why you’re there. I just love my job.”

Part 2 of our 5-part “Freedom to Read” series By Brenda Ortega, MEA Voice Editor Michigan Education Association MEA member Elizabeth Gates has had to organize against efforts to ban books in Greenville Public Schools, a rural district 30 miles northeast of Grand Rapids where she serves as an instructional coach and local union […]

Providing additional academic support for students recovering from the pandemic has become a key use of federal school rescue funds in local districts across Michigan. Many school leaders are spending these resources on tutoring for students who struggled to adjust to learning from home and are now working to catch up. More than 200 school […]