MEA member Marti Alvarez makes a distinction between her job at Traverse City Area Public Schools and her reason for being. 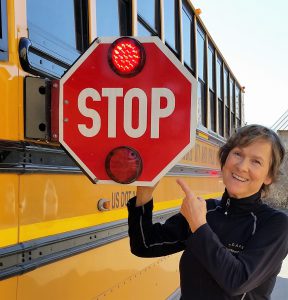 She is employed as a bus driver, but she is driven by a goal to help students be successful human beings – a message she spreads to colleagues doing every type of work in schools, whether it’s serving food, running an office, cleaning classrooms, or any other task.

Last weekend, Alvarez was presented with one of MEA’s highest honors for Education Support Professionals, the Leon A. Brunner Award, for her activism and leadership on behalf of kids and union members.

Alvarez is known for having a big heart and an active imagination. When she sees a problem, she wants to solve it.

Last spring, when a handful of fifth graders were given a six-week suspension from their morning buses for misbehavior, Alvarez proposed a solution that would keep them in school. She offered to drive them separately in a school district van.

“One boy came to me, practically in tears, saying ‘We’re not going to make it to middle school,’” Alvarez recalled. “These were at-risk kids, and there was nobody at home who could transport them.”

She understood the children – one as young as kindergarten – needed consequences for breaking the rules, Alvarez said. But she also knew any discipline that removes the students from school increases the likelihood they will drop out or get in more trouble in the future.

“They would rather be at school, getting a meal and some positive attention,” she said.

An added bonus of her temporary van program was getting to know those kids better, she said. She saw an improvement in their behavior, and a principal told her the change extended to the classroom as well. They still give her hugs when they see her, nearly a year later.

“I believe we need to talk eyeball to eyeball with these students, rather than just being the authority figure,” she said.  “If we can walk in the students’ shoes a little bit, we can be a part of their success story.”

Not all of the students made it to end of the year riding the van—a couple “couldn’t manage it,” she said. But it wasn’t for lack of trying on her part.

Alvarez had a similar problem-solving reaction a few years ago when a kindergartener boarded the bus with painfully cold feet after waiting at a stop in sub-zero temperatures with no socks on.

She credited NEA and MEA leadership training for giving her the confidence to do more than cry about the sad situation. She organized a community sock drive, coordinated by school bus drivers, which brought in thousands of pairs of socks for students in need.

Alvarez has taken advantage of many training opportunities through the union, including the Minority Women’s Conference, Emerging Leaders, Powerful Public Speaking, and ACE Childhood Trauma Training.

“It really started to open my eyes about the professionalism of the positions we have,” Alvarez said. “I started to know there is a higher purpose to what I was doing than driving the bus.”

Since then, Alvarez has developed her own training – “Higher Purpose: Educators Employing Empathy for At-Risk Students” – which she has presented in Michigan and at NEA events around the country.

She has served as TCTA secretary, union steward, MEA/NEA RA delegate, MEA/NEA board member, and Region 15A Coordinating Council Co-chair.

“I would not be involved in all of these opportunities if not for my union,” she said. “I became like a sponge soaking up information about how to better myself. And I realized it’s best to be positive and enthusiastic, because it rubs off on others.”

In her spare time, Alvarez spins soul and blues music on a local public radio station and works as a DJ with her husband. She is a certified black belt with the World Taekwondo Federation, having trained in martial arts since 1978.

The Leon A. Brunner Award is given annually to an ESP who exemplifies outstanding commitment and significant contributions to the field.

By Brenda Ortega MEA Voice Editor At Parma Elementary School in Jackson County’s Western School District, students coming through Miss Dawn’s cafeteria line enjoy a generous serving of love along with their chicken nuggets, buttered corn and apple slices. “The kids absolutely love her because they know she cares,” said Principal Sue Haney. “She jokes with […]

By Brenda Ortega MEA Voice Editor When Dawn Weaver facilitates trainings or discussions around race, she talks with educators about the importance of creating “windows and mirrors” in their classroom practice. “I’ve always tried to have representation—not just for African-American students but any marginalized individuals—and make sure that everybody in my class is seeing themselves and seeing […]