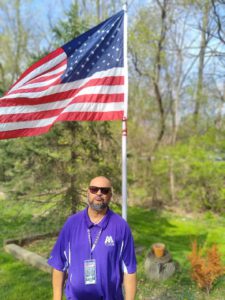 Motor Co. Instead his upbringing eventually led the 64-year-old former UAW shop steward to a full-time role as a community assistant at Pioneer High School in Ann Arbor.

The support staff position requires him to wear “quite a few hats” and has spurred him on to pursue a degree at Washtenaw Community College (WCC) through Gov. Gretchen Whitmer’s Futures for Frontliners, a tuition assistance program for workers who provided essential services at the start of the pandemic last year.

“I’ve had a busy life, but that’s how I was raised,” he said. “You try to make the best of life, and you try to do something positive that makes a difference to society and your community and your family, something that leaves a legacy for the ones that’ll be here when you’re not.”

Cooper enjoys the variety of tasks he undertakes each day as one of seven community assistants responsible for daily supervision and troubleshooting at the 1,800-student high school. But he especially relishes getting to know students well enough to recognize a problem or be a sounding board.

Community assistants monitor morning and afternoon “rush hour” and travel the building throughout the day offering assistance where needed. They are trained to spot signs of abuse or neglect, he added, but they also learn to notice small changes in a student’s demeanor to prompt a simple question of “Is something going on?” Or “Is there anything we can do?”

“A lot of times, they will let you know,” he said. “It could be something as simple as ‘I forgot my lunch money.’ Well, that’s an easy one, so I’d say, ‘I’ll loan you the money, and you can pay me back tomorrow.’ And something that simple can change a student’s whole day.”

Cooper also hopes to influence students’ lives. He likes to talk with them about their plans for what to do after high school, and he speaks from experience about the opportunities for post-secondary training and education that can lead to good-paying jobs and a bright future.

In Ann Arbor, a wide range of choices exist for continued education after high school, from community colleges to universities, he noted. Not everyone wants to get a four-year degree, and those high schoolers often benefit from gentle steering in the direction of Career and Technical Education (CTE) certificate programs and degrees, he said.

“Some of them will join the military, and some go into nursing, but there’s also a lot of skilled trades out there: bricklaying, pipefitting, plumbing, electrical, HVAC. You have to strike up a conversation and find a way in so these kids come to you and share their problems and listen to what you have to say. You have to try to pair them with a future they can look forward to and enjoy.”

It helps that he walks his own talk.

The son of an autoworker and paraprofessional, Cooper and his four brothers and three sisters enjoyed a middle class life growing up in Willow Run next to Ypsilanti. All five boys followed their father’s footsteps at Ford, and the girls went to college.

Cooper began in assembly at age 19, working on a production line building dashboards for Mustangs. His piece of the assembly took 33 seconds before he moved on to the next one – a grueling pace that made every day feel like a “major workout.”

He has taken community college classes here and there over the years, but continuing became difficult as he earned promotions and changed shift schedules at Ford. He operated a landscaping business, in addition to his factory work, for 20 years.

In addition to the classes he took, his education about the world was aided by leadership roles in the UAW, where he served as a steward and district representative or alternate for 15 years, he said. To be effective, he had to learn about and try to understand people from different races, cultures, and backgrounds, he said.

“Sometimes we can have blinders on, and if we don’t see beyond our own environment or how we grew up, it’s a small world. That’s the thing about education, it opens you up to have the desire to know different cultures and how other people think and live.”

That experience has helped him at Pioneer High School, where he encounters students from numerous races, ethnicities, and national origins, he said. With students whose first language is other than English, he learns to greet them in their native language as a way of building a relationship – “just a small thing to let them know I care.”

After retirement from Ford, he initially followed his passion for cooking to get a Culinary Arts certificate from WCC in 2013. For several years, he drove school buses and worked in food service.

Since getting accepted into the Futures for Frontliners program in March, Cooper plans to enroll in WCC classes this summer to complete an associate’s degree in Liberal Arts. He also has been taking advantage of online professional development through MEA and earning continuing education clock hours, or SCECHs. He learned about all of these programs and benefits when he stopped in the local MEA office in Ann Arbor and met UniServ Field Assistant Kimberly Wolcott.

Cooper has joined three online book studies since becoming part of MEA, most recently completing sessions on How to be an Antiracist by Ibram X. Kendi. Another book study taught him about the effects of trauma over time – a topic that he was eager to learn about, both to help students and to understand how losing his father at age 15 to a car accident changed the course of his life.

The book studies have also helped him learn to understand and get to know LGBTQ students, he said. “As educators, we have to be enlightened about this generation and this movement, because they are coming out and letting you know who they are, and we need to treat them with dignity and respect.”

The union is part of what drew him to the community assistant position, he said. Food service jobs were privatized, and he wanted to enjoy the benefits and protections of being part of MEA. “The union is what caught my eye, and at this point I’m just more than glad to be here and healthy and doing something positive with my time on this earth,” he said.

While Futures for Frontliners is now closed to new applications, Michigan residents over the age of 25 who do not hold an associate’s or bachelor’s degree can apply for another of Whitmer’s tuition assistance programs, Michigan Reconnect.

More than 67,000 Michiganders have already applied for the program since its launch in February, according to a recent Inside Higher Ed story.

The programs are part of the governor’s goal to boost post-secondary degree and certificate attainment in Michigan to 60% of adults by 2030. The initiative, known as Sixty by 30, connects high school graduates and displaced adult workers with education and skilled trades opportunities.

From the Blissfield Royals to the Kingsford Flivvers, local public schools are core to the identity of small towns across Michigan. No matter their differences as individuals, people in rural communities are unified by their local schools and mascots. But because of inequitable funding, declining enrollment and a lack of concern from some lawmakers, many […]

Educators Win Legislative Seats to Clinch Democratic Majority By Zach Crim MEA Public Affairs When Jaime Churches’ alarm went off at 6 a.m. on Wednesday, Nov. 9, in many ways it was just another day preparing to teach her fifth-grade class in Gross Ile. But the hundreds of notifications on her phone betrayed the climactic […]