From Discouraged to Empowered: My Story of Union Advocacy

We have a big problem in Michigan schools, folks, and it has nothing to do with test scores or differentiated instruction. It has everything to do with treating teachers like professionals and human beings. 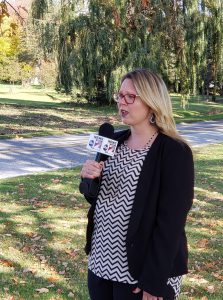 Most recently, this came to the forefront for me as a union president assisting an employee who had requested additional time to express milk at work for her child. She was denied the time. Yes, you read correctly… denied. Now, you’re probably wondering what year we’re living in, right? Yes, it’s still 2019. And, yes, an employee was refused time at work to feed her child! It seems ludicrous, but I assure you it happened.

What’s even more aggravating is the fact that the law is not totally on her side. The Patient Protection and Affordable Care Act amended the Fair Labor Standards Act to require employers to provide reasonable break time for HOURLY workers to express milk as needed in the workplace, but it only encourages employers to follow it for salaried employees… and guess what? Teachers are salaried.

This means the hourly paraprofessional or custodian is guaranteed time to express breast milk at work, but teachers are not. This means the principal or administrator, who is salaried, can easily step away from her office to express milk, but the teacher down the hall cannot, because she is in charge of multiple students and the district might not send someone down to relieve her.

Do some districts actually help breastfeeding mothers? Sure. Some principals will even cover the classes of mothers who need to express milk. I heard this from a principal himself. Or, they might rearrange a teacher’s schedule to work it out. However, the sad truth is that school administrators don’t have to accommodate breastfeeding mothers unless associations negotiate this requirement.

In my district, a mother was ordered to adhere to her schedule. She was denied 15 extra minutes to express milk. Her coworkers were denied the opportunity to cover her class. She was denied using personal and sick time. Her doctors note was denied. DENIED. Of course, we are doing everything we can to help her within the law and contractually, but, remember, the law is not on the side of teachers regarding this.

As a local president, I was of course flabbergasted by the fact this young mother was treated unfairly, and I was equally dismayed with the law’s lack of protections. But, at this time, it made me realize the importance of our union. Our voice does matter. It matters now more than ever.

After scouring the internet, I realized that this was a much larger issue than just in my district. There are online forums where breast feeding teachers go to air their trials and tribulations with the lack of support they receive in their districts. Stories of women being shoved in closets to express milk or even being disturbed time and time again were plastered all over the internet. Stories of quitting breastfeeding or losing milk supply also permeated women’s accounts. Some were even afraid to ask their male superiors for time to express milk. What’s sad is that I not only saw these stories via the web—I heard them firsthand from my colleagues and people in other districts once I inquired. These anecdotes left me not only dismayed but empowered. It was time this changed… not in three years or five… NOW.

Once I began researching breastfeeding laws in Michigan, I encountered an article that mentioned then-Sen. Rebekah Warren, who sponsored the Breastfeeding Anti-Discrimination Act in 2014, which enshrines the right of mothers to breastfeed their children in public places.

I thought it was a longshot, but I emailed Warren, who is now a state representative. She responded and wowed me with her response. After learning of the situation in my district, she began working with the Legislative Service Bureau on a bill – similar to one in Louisiana – that extends protections to teachers for expressing breastmilk at work.

Now, we can anxiously await and take action to make sure Rep. Warren’s work comes to fruition.

So, brothers and sisters, our union does make an impact. It’s time more than ever that we raise our voices – whether it’s to help a young mother who is facing discrimination due to milk expression or letting our elected officials know we’ve had enough with the piles upon piles of paperwork or burdensome testing of our students.

Sing it. Say it. Sign it. Do what you must, but let others know: our union is strong and we make a difference for our students and our profession.

Statement from MEA President about suspension of school year due to COVID-19
April 2, 2020
Recent Articles
Archives