Gabby Taylor, a fourth-year teacher in Ann Arbor, channels veteran educators’ frustrations in “Teachers Anthem,” a moving song she wrote and performed at a school board meeting as contract talks started. 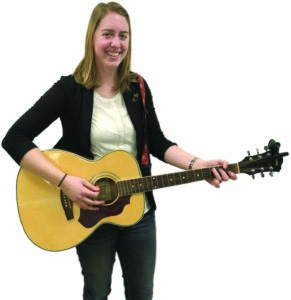 You must have a music background—the anthem is powerful. I started writing in eighth or ninth grade. I took guitar lessons. I did show choir and theater, and I directed an acapella group at U of M. At one time I thought I would make a career out of songwriting and production.

How did you become a first-grade teacher? I worked at a lot of summer camps as a counselor for sports camps and overnight camps, and it was the most sure I felt about myself. That was when I realized I can make really meaningful connections with kids.

Do you use music in your classroom? We sing songs about parts of speech and telling time. I do a lesson where I have the kids write a song with me about words that start with a certain letter, and they bring it up months later like, “Can we sing the F song?” My favorite thing is every year at least one student gets their parents to buy them a guitar because they think it’s cool.

How did you come to write “Teachers Anthem”? Our goal was to get the word out that teachers have been struggling since before I got into the profession. I’ve been talking to my colleagues for the last few years about issues surrounding pay and our frustrations with the profession, and that’s where I pulled pieces for the chorus. I don’t have a kid, but my colleagues do. I just got new tires for my car. I bought my first house this year, so a lot of parts were relevant to me. But this is a nationwide issue. I wanted this to be an anthem for all teachers.

One line says, “It’s been 12 long years since the pay topped out.” Has there been a salary freeze? For teachers on the top level for 12 years, their pay is less now than 10 years ago. For others on steps, we’ve had a couple years of deductions where all the pay on the calendar drops. We’ve had years of freezes or half steps. My take-home pay has gone down the last two years. So a few months ago I created an algorithm to help people figure out how much money they’ve lost since starting their careers. Even a fourth-year teacher like me has lost $7,000. A colleague who’s been here for 12 years has lost $43,000 because of all these adjustments to our pay.

A phrase echoes in the song: “The teacher is speaking/ are you listening?” What do you want the public to hear? Education is not getting the respect and attention it deserves, and as a result teachers are dropping out at an alarming rate. I have multiple friends from my School of Ed who graduated with me in 2016 and are already out of the profession. As I’ve shared this on Facebook, I get messages from them saying, “You’re right. This is why I quit a year ago.”

Along with pay, what issues are driving them out? The increase in behaviors and lack of resources to help. More kids with trauma, and no full-time social workers. Not enough access to special-ed resources. Class sizes and standardized testing are increasing. My kids are six and taking standardized tests three times a year. It’s very daunting, the mountain we’re up against.

What keeps you going? I still feel that same feeling I did the first summer out of college, that I’m in the right place. I’m making meaningful connections. I’ll play tag with them at recess or kickball or soccer, and I’ll show up at their games on the weekends. We have little jokes and handshakes, and we feel like a real team. It’s hard to see it every day, but I still think I’m putting more good out there than I would be somewhere else.

Watch an MLive video of Taylor’s school board performance.