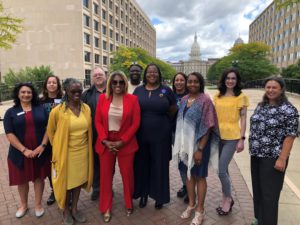 Parents, education advocates and several candidates for office came together during a break in the monthly State Board of Education meeting on Tuesday to speak out against organized right-wing attacks that are attempting to divide parents and educators.

The State Board’s vice president, Pamela Pugh, said ongoing disruptions and divisive rhetoric at school board meetings are meant to weaken public education. Speakers at the noon press conference said they wanted to push back against that vocal minority attacking educators and schools.

Those who value diversity of ideas — whether in the school library or curriculum —must make their voices heard, said Pugh, who is seeking re-election to the State Board in November.

“We are here today so that our children, our parents and our educators across this great state know that we will not be divided, that we will continue to stand strong and united together,” Pugh said.

Kathleen Lucas, co-founder of Michigan Parents for Safe Schools, said the majority of parents understand how critical public schools and educators are to the future of the state, and they find it distressing to see a loud minority of extremists attempting to hijack public debate.

“We have had enough,” said Lucas, whose two children attend Hudsonville Public Schools. “We must stand up together and speak out against this divisive, false narrative that is tearing our schools and our communities apart at the seams. The majority of parents understand that there are already many ways to be involved in their children’s education without creating additional legislative red tape for teachers.”

Organized attacks by fringe groups such as Moms for Liberty, which supports banning books and censoring educators’ speech on issues of race and gender, have flooded public comment periods at many board meetings across the state for months, including the state board.

Karrington Kelsey, a former educator in Lansing who now works in youth advocacy with a local nonprofit, said he was speaking up as a soon-to-be parent who wants his child and all young people to be exposed to a diversity of stories.

Erasing the stories and voices of people of color and LGBTQIA+ communities reduces the strength of the whole community, he said: “When we don’t tell these inclusive stories, we lose what these people contributed to America and contribute to our communities every day.”

Jamila James, a mother of three running for the Ann Arbor school board, said the recent push to limit teaching and learning is based on a fear of uncomfortable ideas.

“Knowledge is power,” James said. “Why are we allowing our fear and discomfort to take away the power of our children?”

“Trust in the teachers to teach,” she said. “Trust in your parenting skills to guide. Trust your kids to think. Don’t be driven by fear — for we were not given a spirit of fear, but of power, love and a sound mind.”

Political extremists are trying to make education a wedge issue for November’s midterm elections by twisting the truth, said Mitchell Robinson, a professor of music education at Michigan State University and a candidate for the State Board of Education.

Public education is designed to serve all students and respond to the needs of parents and communities, Robinson said, adding that extremists “want to decide what books other people’s kids get to read.”

“More importantly, they want to impose their own narrow, regressive agenda on the entire public school system,” Robinson added, “transforming a public good into a privatized, insular environment that advances an extreme point of view.”

Stephanie Crider, a parent in Bloomfield Hills Schools, spoke to clarify what she believes most Michiganders want from public schools: “They simply want us to ensure their children can have a quality education that includes equitable resources for our most vulnerable students and those who face challenges that are no fault of their own.”

Looking for common ground, Crider said everyone wants schools to seek pathways that lead to every student reaching his or her maximum potential.

State Sen. Erika Geiss, D-Taylor, echoed calls for unity to replace division in the public discourse. When parents and educators are put at odds, “it’s our kids who pay the price,” she said.

A former educator in the college and university realm, Geiss pointed to the well-known adage of education as a three-legged stool that needs all three points to remain steady: home, school and community.

“Our kids deserve a unified support system, and we all have a significant role to play in creating that for them,” she said. “It starts with listening to, cooperating with, and respecting one another, and in doing so setting an example for our kids. We can’t let anger and outrage divide us any longer.”

Geiss continued: “As a parent, as a former educator and as a legislator, I’m here to tell you we all exist together, and we must unite to do what is right for our kids. We will not be divided, and we are stronger united.”

EAST LANSING — The ongoing educator shortage and student mental health are the top challenges facing Michigan teachers and education support professionals, according to a new survey of educators released Wednesday by the Michigan Education Association. “These last few years have been extremely challenging for our students, educators and parents, and this survey makes it […]