As a parent in Livingston County’s Hartland Consolidated Schools, Laura Moore publicly addressed the school board in February to say that a small group of vocal people who have been lobbing insults and criticism at every board meeting for months do not speak for everyone. 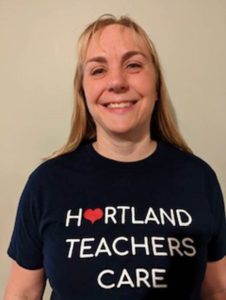 “I addressed the board as a parent of three students and said that while I didn’t want to take away from the experiences others are having, I did want the board to know that my experience was very much different,” Moore said in an interview of her reasons for testifying.

At the next board meeting in March, Moore spoke again — this time as a high school science teacher and local union president backing the district’s social-emotional learning initiatives (SEL). She invited members of the Hartland Education Association (HEA) to come along, and about 50 showed up on short notice to stand in support as she spoke to the board.

“We were taking a stand to support SEL against unwarranted attacks,” Moore said. “We wanted the board and the public to know that SEL allows us to support our students, and we’re literally and figuratively willing to take a stand for it.”

Like similar outbursts across Michigan and the U.S. over the past year, angry protests in Hartland began over mask policies amid the pandemic and morphed into attacks on efforts to support students’ mental health, teach accurate history, and improve equity and inclusion for marginalized and minority groups.

“For several months, we’ve had the very core of our professionalism attacked,” Moore said. “Teaching is honorable and noble, and people are tired of being beaten up for choosing to go into a service profession. It’s counter-intuitive to us.”

The organized and ongoing attacks on school boards coincide with a rash of proposed laws in dozens of states, including Michigan, to restrict how teachers can discuss issues of race and gender in the classroom and to require teachers to post all lesson plans and materials in advance of the school year — among other divisive proposals.

An analysis by NBC News last summer revealed the coordination and funding by conservative groups and think tanks behind the tactics, which aim to drive a wedge between parents and educators in an important election year.

Meanwhile, surveys continue to show educators being worn down by lack of respect — a factor cited among reasons why many are leaving the profession. In a recent MEA survey, 77% of respondents cited “attacks on teachers and schools over issues like masking and curriculum” as a major concern.

At the same time, the latest Gallup polling from 2021 shows three out of four parents are satisfied with the quality of education offered in their public schools, which 90% of American schoolchildren attend.

MEA President Paula Herbart has called on policymakers to stop pushing divisive measures that only serve to exacerbate a critical educator shortage. Last week, another MEA member added his hope that other parents will counter the attacks by showing up to board meetings in support of schools and educators.

Keith Kindred, a social studies teacher in Oakland County’s South Lyon, shared an op-ed on Michigan Radio,  writing: “History and common sense both teach us that extremism unopposed gains adherents. They are filling the void of your silence with anger and a fear of diversity. They are attempting to suppress your children’s opportunity to gain valuable insights from the panoply of human experiences, the good and the bad.

In Hartland, some parents have been placing newspaper ads in support of the district’s Diversity, Equity and Inclusion (DEI) committee, which was formed last year following a Black high school student’s reports of racially motivated attacks and harassment at school. Four teens have been charged in the case.

In her comments to the board, Moore pointed out the message from matching HEA shirts many of the members in attendance wore, which say “Hartland Teachers Care” on the front.

“We take our role as part of the proverbial village very seriously, and most of us have shirts that say exactly that—we care,” Moore continued in her address. “The keystone of our profession is to include all of our students, and our district’s DEI efforts are vital to this.”

Student needs are greater than ever, she added, and require the attention of everyone “from classroom teachers to counselors and administrators and everyone in between. We need those kids to see that we are adults in their community and in their lives who care about them.”

In her interview with MEA, Moore said the recent tenor of the debate has sparked desire to take action, especially as the election approaches this fall.

“My membership is stressed out over what’s happening,” Moore said. “They’re disheartened, to say the least. I think it’s important for people to know we have others who are with us.”