One of the hardest things Nick Peruski has learned to do as a teacher in Huron Valley over the past decade is to let kids fail.

Not letter-grade “F” fail. Peruski’s approach asks students in his high school business, multimedia, and web design classes to face challenges, develop and test solutions, and learn from what works and what doesn’t. 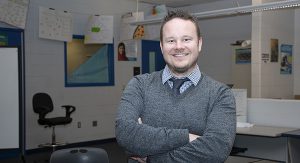 “It’s so hard as a teacher because our instinct is to help kids, but when you step in to help you’re preventing a teachable moment from occurring,” he said in an interview. “Society conditions kids to be afraid to fail, as if it’s a bad thing instead of an experience that makes them stronger.”

For his student-centered approach to preparing young people for future careers, the 10-year veteran teacher and local MEA leader was honored with a national Milken Educator Award last month.

Dubbed the “Oscars of Teaching,” the award comes with a $25,000 unrestricted cash prize and membership in the National Milken Educator Network – a group of more than 2,800 top teachers, principals and specialists across the U.S. dedicated to strengthening education.

Honored at a surprise school assembly in December – educators do not know they are under consideration for the award – Peruski joked that his mouth was hanging open in every photograph from that day.

“I work with so many amazing teachers, and I get so many ideas and so much inspiration from them, that this just blew my mind,” he said. “I was completely shocked. I couldn’t even process it.”

“Nick Peruski knows and shows his pupils that success is a skill that can be learned,” Gallagher told the assembly of students and staff at Lakeland High School in White Hills. “Nick’s creative, adaptable methods and commitment to his students’ needs is the kind of forward-looking dedication we seek in our Milken Educators.”

Peruski spent seven years as a middle school math teacher before he transitioned into his current role, which splits his time between teaching and overseeing the district’s career and technical education (CTE) department.

Now in his third year as CTE coordinator, Peruski makes technology purchases, schedules field trips, brings in guest speakers from various industries, and helps to arrange internships and other job experiences for students.

“It’s important for kids to hear different people’s stories and different perspectives, because there are so many possibilities and one size does not fit all,” he said.

In his project-based business class at Lakeland High School, Peruski has students run a virtual company and manage personal finances in a simulated world.

Students apply and interview for jobs, develop a product line, track sales, and process payroll. They receive virtual paychecks and learn to balance personal checkbooks while paying for rent, utilities, food and other life necessities.

They write and present business plans for competition at the state and national level, where they also design and operate a sales booth at huge student-run trade shows. In addition, at the Youth Business Summit in New York, randomly selected groups of students compete to solve a global business challenge with other teens from all over the world.

“Kids start off timid and not wanting to venture out – just sort of clinging to their booth,” he said. “But then as they get more and more comfortable, they come out of their shells and their guard drops down and they’re able to interact with each other. It’s pretty cool.”

His multimedia class exposes kids to a range of skills in video, audio and photography. Kids whose interest is piqued in one area can move on to other programs that offer a deeper dive. The school houses a TV studio and broadcasting course, for example.

Peruski has also continued to broaden his own horizons through experiences developing curriculum and teaching in China, presenting at a conference in Lithuania, earning Master’s and Education Specialist degrees, and participating in a two-year Galileo Leadership Consortium at Oakland University.

He credits the Galileo program with giving him permission to see himself as a teacher-leader. “The number-one influence on student achievement is collective teacher efficacy, and Galileo is about the belief that we can work together to effect change. It was a transformative experience.”

His role as vice-president of the Huron Valley Education Association has given him a chance to put those beliefs in practice. Peruski feels fortunate to work in a district where the union and administration have a collaborative working relationship.

Together school management and union and staff leaders have developed a new model of professional development launching this month, based on the concept of Personal Learning Communities (PLC).

Instead of receiving district-provided professional development, faculty members will work in partners and groups to identify areas of practice to improve, research and test new strategies, and share experiences and refinements – just as Peruski’s students do.

“We’re going to be given time to work together and have the ability to learn from each other, which is so important. We have such a great variety of resources within our own districts; why not tap them?”

As a Milken winner with a newly widened sphere of influence, Peruski will be asked to develop a platform that he’s interested in advocating about on a bigger stage. It will be tough to choose, he said.

Of course, he’s passionate about CTE and making more people aware of the exciting career possibilities open to young people who do not wish to pursue a four-year college degree.

At the same time, as vice-president of the Huron Valley Education Association, he knows how woefully underfunded public education has been for two decades and how the lack of resources and respect for the profession has led to educator shortages.

“We need to attract talent to the field and inspire our children to consider a career in education, so that has got to change.”

But he’s also interested in advocating for greater diversity in the profession. He recently began working on his district’s diversity committee several years after deciding to come out to his students, he said.

Without making a big deal of his sexual orientation, Peruski said he talks about his husband on the first day of school just as other teachers share personal tidbits to introduce themselves to students.

“I used to keep my personal life secret because I didn’t know what the ramifications might be, and then one day something changed. I wanted be an example to kids. I have students that are gay or transgender or dealing with gender issues and feeling isolated. My not talking about it was making it worse.”

Diversity in the profession is important so students can see themselves reflected at school and have an adult to talk with who can understand their issues and concerns.

“I read an article a few months ago that said only 2 percent of teachers are African-American males,” he said. “That’s just sad. We need to change it.”

Milken educators are selected in early to mid-career for what they have achieved and for the promise of what they will accomplish. Peruski earned a bachelor’s degree in integrated science and a master’s in instructional technology from Eastern Michigan University.

What he loves most about teaching is not only the fun and challenge of finding creative ways to engage kids and teach difficult content. “I like teaching them how to be tolerant of each other and kind and caring. That’s often overlooked when we’re talking about standardized tests.

“Teachers have an amazing opportunity to help kids develop into good people and well-functioning adults.”

This year’s 40 new Milken Educators will attend a forum in March and be paired with a mentor to explore and prepare for expanded leadership roles to strengthen education practice and policy.

Peruski said he plans to use his award money to pursue a doctorate degree.