For the last few years, students in Alanson Public Schools about 10 miles north of Petoskey did not have physical education classes. Declining enrollment and inadequate state funding meant the course had to be cut from every grade level except for one semester of high school to meet graduation requirements. 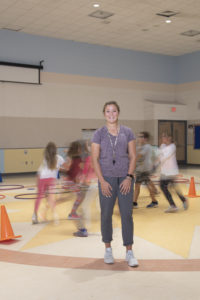 This year, thanks to a regional enhancement millage passed by voters across three counties in 2017, Alanson’s 223 K-12 students not only have a new PE teacher—she’s a former high school state champion in the 300 hurdles who ran track at Grand Valley State University.

On a recent winter day, Hicks’ elementary students seemed thrilled too—they were navigating an obstacle course wearing new pedometers they would eventually take home to keep after learning about the importance of staying active every day.

“I wasn’t quite sure what I was walking into as a first-year teacher with nothing set up from years prior, but it’s been amazing,” Hicks said, noting she’s been mentored and helped by both a teacher and administrator in the district.

Make that the ONLY administrator in the district. Rachelle Cook, who started at Alanson 12 years ago as a teacher, now serves as the principal and superintendent of the district’s one school building. She proudly discusses the changes that the community has made with the influx of dollars from the millage.

In addition to returning physical education and movement to the school routines of youngsters, the district’s board responded to community desires to bring back a counselor position cut eight years ago. In addition, each year over three years, a core curriculum is being replaced.

Over two years, all new Chromebooks were purchased, and afterschool clubs got a funding boost.

Last school year, every teacher received $1,500 to enhance their classrooms, “and it was like Christmas; they were so excited,” Cook said. “They bought things that could be reused—a kidney-shaped table in one classroom. Robotic and engineering materials. Magnetic letters, things like that.”

A boost to the athletics budget eliminated pay-to-play requirements for students. A new phone system, compatible with the local e-911 system, enhanced security. And last month, the media center reopened staffed by a newly hired media specialist for the first time in nine years.

“It’s nice that there are no strings attached, and between the school board, the teachers, and me—we get to decide what we need and how we want to spend that money to benefit our kids the most,” Cook said.