Gov. Gretchen Whitmer ventured into the Jackson County turf of Senate Majority Leader Mike Shirkey (R-Clarklake) on Thursday to illustrate the struggles schools are facing without a state budget and press Republican leaders to put real solutions on the table.

At Jackson High School, the school year started with two administrators at the helm instead of the four needed in a building of 1,200 students, Superintendent Jeff Beal said. The district recently hired two new administrators “on good faith,” who won’t start until next month to save money.

“We know we need more boots on the ground to be able to provide for our students, but we delayed that expenditure,” Beal said he told Whitmer.

Superintendents across the county are reporting delayed hiring and technology and equipment purchases based on the uncertainty of operating without knowing how much money will be available, he added.

“We also talked about not messing with pensions,” Beal said. “We’ve got lots of folks who anticipate when they retire that their pension is going to be there for them. I don’t want the government taking out a credit card consolidation loan with our pension money.”

Whitmer has proposed a budget that would tap new revenue for road repairs and produce the largest education spending increase in 24 years, but Republican leaders in the House and Senate have responded with more shell games and half measures, Whitmer said.

According to the capitol news service Gongwer, Shirkey favors a plan to bond and reamortize the Michigan Public School Employees Retirement System (MPSERS) to pay for road repairs – an idea Whitmer has labeled a non-starter.

She restated her opposition to the “pensions for potholes” scheme on Thursday.

“This is a competitive issue for us as a state, and that’s why I’m determined to get it right and not to take money out of teacher pensions to fill potholes,” she said.

Learn more about the irresponsible “Pensions for Potholes” schemes at www.PensionsForPotholes.com — and contact your lawmakers to oppose them!

Whitmer noted she submitted her budget in March – including $507 million in additional education spending to rebuild student supports, literacy services, and career-technical education, among other initiatives. The Legislature left for summer in June without approving a spending plan for the first time in nine years — they returned to work this week.

“Now schools like Jackson are two months into their fiscal year, and they don’t even know what they’re working with,” Whitmer said during a press availability in the JHS library. “That’s why I’m going to stay at the table until we have a budget that fixes the roads and funds our schools.”

On Wednesday, Shirkey told reporters he would send Whitmer a budget without a plan for long-term road funding, which numerous studies estimate will require $2.5 billion a year to bring 90 percent of state-owned roads into good or fair condition.

The first-term GOP leader of the Senate, Shirkey said the Republican spending plan would include some additional funding for roads and schools next year, but he declined to make it public.

“I’m hoping the Republicans don’t force us into a (government) shutdown,” Whitmer said. “I’m serious about fixing this problem.”

Voters want real solutions after years of neglect, recognizing that crumbling roads and schools put Michigan at a competitive disadvantage, she said. That is why chambers of commerce, school administrators, and labor leaders have united behind her budget, she said. 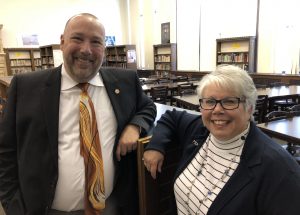 “These are the critical things that benefit every one of us when we get it right,” she said.

MEA President Paula Herbart joined the meeting with Whitmer and school officials in Jackson, noting the school funding problems faced by the governor have been decades in the making. Since Proposal A passed in 1994, Michigan has been dead last among all states in school funding increases.

“When we see things crumbling like our schools, like our infrastructure, when we don’t have secure funding for our students, that’s a problem,” Herbart said. “The governor is willing to address these problems in a way that we haven’t addressed them in a generation.”

School employees across the state deserve better treatment than they are getting, Herbart added. They must do the work to open schools on schedule even while they are hamstrung by the uncertainty of being without a budget.

“If they’re ready to go, why isn’t the Legislature?”

Raise your voice now for real solutions that provide the funding our students deserve — look up your lawmakers information and contact them NOW!