It was late on Monday, January 10, the night before Oxford High School students and staff would come back together in a school setting for the first time since a horrific shooting six weeks earlier that killed four students and injured seven, including a teacher.

The first day back would be Tuesday, a half-day, with a 45-minute Zoom presentation from a renowned trauma expert, followed by abbreviated periods 1-3 featuring mostly social-emotional learning. The second half day—Thursday—would run periods 4-7.

Nothing would be normal, but re-establishing routine would be crucial, he said: “I use the word ‘normal’ with quotation marks these days. Normal is not a thing right now, so that’s kind of how we’re rolling.”

After six weeks of grief and tears, counseling, planning, anxiety and more grief, Gibbons felt ready to return despite his fatigue. “Make no mistake, it’s going to be difficult, but I’m hopeful that once teachers get back with kids they’re going to feel like, OK, this is where I’m supposed to be.”

There would be many firsts to get through together. 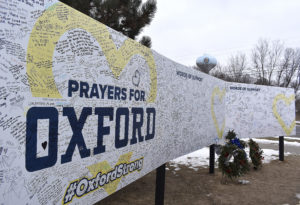 The first time passing classes, as students were doing when the shooter attacked on Nov. 30. The first time gathering fifth-hour groups of teachers and students who had barricaded and huddled in classrooms that day. The first time back in the high school building with students after the completion of repair work.

“This is going to be a marathon. You know, Parkland happened four years ago—February 14, 2018—and they’re still dealing with it. Right now for everybody here, it certainly feels like we’ve joined an exclusive club that no one wants to belong to.”

For his part, Gibbons has been thrust into a role he never expected or planned to face, but his experience juggling multiple priorities as the high school band director for 24 years and in his 18-year tenure as local union president has helped him to meet the moment. 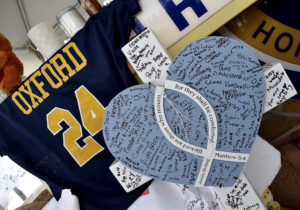 “I can’t imagine being a first- or second-year leader and having to deal with this,” he said, noting among other tasks he has been involved in major decisions around the immediate response and plans for reopening, in addition to sitting in on hours of law enforcement interviews with members.

In the chaos of the shooting’s immediate aftermath, at the Meijer store one mile from the school where students and staff evacuated via buses and on foot, Gibbons first moved into crisis mode after making sure his family had gotten out—wife Melissa, a teacher in the building, and senior twin daughters Hannah and Emma, who had been hiding in a different classroom when a bullet whizzed through.

“We had Meijer make an announcement, ‘Students—go to the garden section and find your fifth-hour teacher,’” Gibbons said. “Teachers were stunned, but yet everybody was doing something. Trying to gather kids. Getting kids to write their names on a list to keep track.

“It was chaotic. Some students had been picked up already. Some hadn’t been evacuated yet. And kids were reuniting with parents, with tears like you would not believe.”

Many teachers had bags, coats, phones and keys left behind in the building. Cars were parked in the school lot, which was cordoned off as a secure crime scene. Gibbons helped coordinate rides with those who had vehicles. He checked the status of the teacher who was shot to confirm she was OK.

He learned in the store the names of the three students who died that day: Hana St. Juliana, 14, Tate Myre, 16, and Madisyn Baldwin, 17. A fourth teen, Justin Shilling, 17, passed away the next day.

Gibbons realized later what kept him going in the face of such overwhelming pain and trauma was the fact he hadn’t been at school that day. He had stayed home with younger daughter Sarah awaiting COVID test results. He had followed the events via text and then headed to the evacuation site.

“I told my wife the good Lord put me where I needed to be when I needed to be there because I felt like maybe I came in with a clearer head,” Gibbons said.

He has been grateful for the guidance of leaders from other sites of mass school shootings. He received the first call that night from Trent Harrison, president of the Newtown Federation of Teachers in Connecticut, where in December of 2012 a gunman opened fire at Sandy Hook Elementary School and killed 27 people, including 20 children. 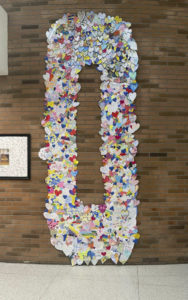 Later that night, Gibbons checked on the status of two band members wounded in the attack. He learned one had been treated and released and called the mother of the more seriously injured student.

The next day, Gibbons returned to the high school with administrators to retrieve the personal items staff members needed returned. They went through the whole building in two teams of three, and Gibbons’ team searched the hallway where the shooting took place.

“It was a war zone,” he said. “Overturned tables, overturned desks, desks piled up. It was shocking to see my daughters’ classroom with a bullet hole in it. Just an absolutely horrific scene. But I felt it was my job to go in there and make sure teachers were getting their stuff.”

Even before the shooting, educators were feeling exhausted from the ever-rising challenges of COVID over the past two years, Gibbons noted, adding many of his members had told him this school year seems harder than last.

“People were already leaking oil up to Christmas break. We had last year, we have this year, and everybody was tired. Already stressed.”

He thought of that as he surveyed the terrible scenes of wreckage in his school, and “I felt incredible sadness but also incredibly proud in how the staff had worked to keep kids safe and save lives.”

Law enforcement officials who reviewed surveillance videos reported the halls were cleared within 10 seconds of the first shots, even though the shooter opened fire during passing time, Gibbons said.

Between the ALICE safety training the staff had recently completed and the Nightlock security stoppers on doors, many lives were saved by the quick action of staff and students, he said. Administrators ran toward the gunshots, he added, waving kids to safety—even aiding the wounded—as the shooter fired nearby.

“And if you ask any of the staff at the high school, their position is ‘We aren’t heroes. We just did our jobs.’”

You can send a message of support to educators in Oxford, and MEA will pass it along.

Teachers Describe Responses to Harrowing Attack: ‘This will not be what defines Oxford’

Exploring a Spectrum of Solutions