One morning last month, Gov. Gretchen Whitmer sat in a rocking chair to speak with a classroom of fifth graders in Jackson after reading to them from a picture book, What Do You Do with a Chance?

The students had conducted research on the governor before her visit, and they asked her questions about issues ranging from pothole-plagued roads, to protecting the Great Lakes and ensuring clean water in Flint and elsewhere. 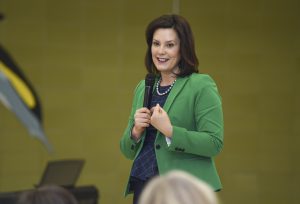 One boy raised his hand to ask the question he’d written on a note card: “Gov. Whitmer, how do you plan to give students and schools support?”

Whitmer explained she had just submitted her budget plan three days earlier, which recognized that Michigan has not adequately supported schools for too many years.

“In my budget, I suggest we use the road dollars to fix the roads and we get your school dollars back into your schools,” she said. “That would mean we could increase how much we spend, so your teacher has the resources she needs and you have the opportunity in this district that kids in other states are having.”

MEA member Alli Salenbien requested Whitmer’s visit to celebrate reading month—but also to give her students a chance to interact with a leader. “I like to advocate for students, especially in inner-city districts, because they deserve the best just like all students do,” Salenbein said.

Whitmer is grabbing hold of her chance—just like the character in the book that Salenbein had her read to the class. In more than a dozen stops around the state in March, she visited classrooms to encourage young people to find books they love and spend time reading.

At every point along the way, she also spoke with adults—educators, administrators, parents—to sell her proposal for reinvesting in the state. She had to make difficult choices in writing the budget, she told the Jackson crowd that stayed after school to hear her ideas.

Whitmer is proposing a gas tax increase to pay for road repairs, which would be offset for lower-income residents by increasing the Earned Income Tax Credit and eliminating the pension tax, among other strategies.

“We can fill potholes by stealing from the School Aid Fund, or we can put an honest solution on the table,” she told the audience in answer to written questions shared by Jackson Superintendent Jeff Beal.

Under her budget plan, Michigan’s K-12 public schools would receive a $120-180 per-pupil boost in funding, plus additional aid to support the costlier needs of at-risk, special education, and career/technical students.

Her plan follows recommendations of several recent studies which examined Michigan’s school funding system and found a chasm between the per-pupil foundation grant and the true costs of educating a child.

The plan Whitmer unveiled before a joint session of the state House and Senate Budget committees would increase K-12 education spending by $507 million in the next fiscal year.

In addition, the governor reaffirmed her commitment to increasing the number of residents who hold post-secondary degrees or skills certification by funding programs to retrain adult workers and to guarantee two years of debt-free community college or university for qualifying students.

The state is at a crossroads, she warned lawmakers in the opening salvo of a push to garner support for initiatives in roads, infrastructure, and education from a Republican-controlled Legislature. Education funding is the same today as in 2007 without any adjustments for inflation, she noted.

“We’ve all seen the headlines—our kids are falling behind, and our schools don’t have the resources they need. It’s taking a toll on our educators, who are leaving for better opportunities or who are not going into the career in the first place.

“We’ve got classrooms crammed with kids who need more face-to-face time with their teachers, and their outcomes make us less competitive.”

In addition to $235 million for the per-pupil bump, Whitmer’s proposal would increase the reimbursement to districts for federally mandated special education services ($120 million); strengthen support for disadvantaged and at-risk students ($102 million); and provide additional career and technical education opportunities for students ($50 million).

The most comprehensive study ever conducted of K-12 school financing in Michigan, released last year, found the state is not only under-funding public education by nearly $2,000 per student but neglecting the needs of English language learners, students living in poverty, and those identified with learning challenges.

Last year’s study by the School Finance Research Collaborative was bolstered by research released in January from Michigan State University which found Michigan had implemented the steepest decline in K-12 education funding among all 50 states over the past 25 years.

“Every other state in the nation is meeting their kids’ needs better than we are,” Whitmer said. “Our goal has got to be taking Michigan from the bottom 10 in the country to the top 10 in educational outcomes for our students.”

Whitmer said the decision to be made at this crossroads is whether to continue down a path of disinvestment in infrastructure and talent, or to make “bold investments” that improve education and opportunity for every student in the state.

“No more shell games and half-measures. Here’s a real plan.”