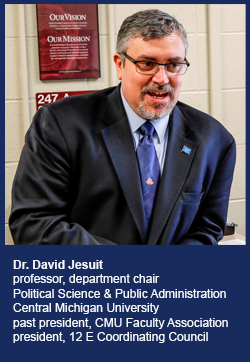 Dr. David Jesuit developed an interest in languages and cultures growing up the son of two bilingual education teachers in Chicago. As a young man, he was drawn to explore answers to big political questions – the very issues today driving debate and concern over the health of American democracy.

“My dissertation focused on how voter turnout affects policy outcomes. And I can tell you, in my research and the overwhelming consensus of political scientists, ‘It matters,’ and we have evidence. The reason we care about who votes is because who votes affects public policy. So now these latest efforts to restrict voting are about preventing poor people from participating. Overwhelmingly, they’re targeting underrepresented groups and minorities, and that will affect the shape of public policy outcomes. That kind of issue drew me into politics, and ever since I’ve focused on income inequality and poverty and its relationship to political participation.”

“Politics is about power. One of the most famous definitions is that it’s about who gets what, when and how. Solidarity, too, is about power, and we’re more powerful as teachers, as workers, if we have solidarity. I’m working on building a relationship between different units on campus through our joint union council, and strengthening the coordinating council (of various MAHE faculty and ESP units) so we have more solidarity across our ‘neighbors’ in higher ed. I have no doubt that greater coordination and collaboration is in our interest as teachers, as union members.”

“Academic freedom is under assault. That’s clear—we’ve seen an example with the new law in Florida, and it’s happening at the K-12 level as well with this debate over critical race theory. I’m an academic in higher ed, and I have an idea of what the term means. We’re talking about history, right? Racism is embedded in the U.S. Constitution—just read it or read the notes that James Madison took at the Constitutional Convention. There’s no doubt about it, and yet there are serious efforts underway to undercut our academic freedom to tell the truth. That’s when you need a union. Only a union can ensure due process for members and respect for rules and fairness. A union can point to a bargaining agreement that’s legally binding. A labor union has rights and protections under federal and state law.”

“A union is about more than bread and butter issues – although data show that pay and benefits are better at a university that has a union – that almost goes without saying. But I think we also need to organize politically to ensure that our state elected leaders return to supporting public education, including higher education. It’s deplorable to see how we’ve stopped investing in the public good and shifted the burden to students and families – just this tremendous debt for families. That shouldn’t be a partisan issue. We need to build solidarity to advocate for public support of universities if we want a more prosperous society, a more just society, and a better functioning democracy.”

Eva Menefee says her interest in academic advising grew out of a bad experience she had as a young undergraduate student seeking guidance from an advisor. “I wanted to be an accountant, which at that time meant getting into the school of business. I can remember going to see the advisor, and he said, ‘People […]