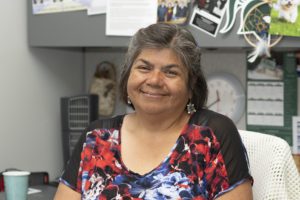 Eva Menefee says her interest in academic advising grew out of a bad experience she had as a young undergraduate student seeking guidance from an advisor.

“I wanted to be an accountant, which at that time meant getting into the school of business. I can remember going to see the advisor, and he said, ‘People like you don’t become accountants.’ I thought, You mean people like me who are Native? People like me because I’m a woman? People like me that are first-generation college students? What does that mean? I never asked him. I walked over to the college of education and found a home.

“When I graduated from MSU in the early 80s, there were no teaching jobs, so I worked at admissions, then advising, and then I ran a transfer program between MSU and LCC. When the LCC job opened up, I applied because I wanted to work with students in my community. I do my best advising in the aisles at Meijer or in the check-out lanes where I see students everywhere. That’s my passion. I love helping students learn and find their path.”

“My dad was a rigger and belonged to the Ironworkers union, and when he got sick I remember the union being supportive of him. So when I got to LCC, I joined the union and started going to meetings. I volunteered to be the secretary, and I was secretary for a long time until I thought to myself I could do more if I hone my leadership skills. I went to some NEA leadership conferences, and I became a delegate to the NEA RA (Representative Assembly) and went to my first RA meeting in San Diego. I learned so much! I became really active in my Native American-Alaskan Native caucus at the NEA level. And I wanted to keep on learning, so that’s what I’ve done. I came back and got on the negotiations team, and eventually I ran for president.”

“I bring a lot of different things to the table for our faculty. More than anything else I listen. I’m trying to get other people who are in our union to grow as union members, too, because that’s how we become strong. I’m so student-focused that I always bring that conversation—to look at how what we do affects our students. And we have so many people who are adjuncts, I always am thinking about our adjunct faculty and wanting to make sure they have a seat at the table. I want them to have a fair wage and the kinds of opportunities that folks who are full-time have.”

“I’m thankful for the union bringing our salaries up to be competitive in the field and in the area. But beyond that, I never thought I would be able to develop myself as a leader or go to leadership conferences or connect with other higher-ed members across the country. Being part of MEA has been one of my most rewarding experiences at LCC. I never realized how being part of a union could make my world so big. I’m a person who believes every step you take with unionism is going to help you and help your future as an employee. I would say to anyone if you have the opportunity to get involved with a union where you work, even on the smallest level, that you should do that. Our union helps us do better, get better, and be better for everyone.”

One thought on “Why I Belong: Lansing Community College’s Eva Menefee”

EAST LANSING — The following statement can be attributed to Michigan Education Association President Paula Herbart, in reaction to the unveiling of Gov. Gretchen Whitmer’s latest education budget proposal: “Gov. Whitmer’s budget proposal will help Michigan turn the corner as we work to move forward from the pandemic and create a brighter future for every […]

By Brenda Ortega MEA Voice Editor Gov. Gretchen Whitmer energized the MEA Winter Conference in Detroit on Friday with a heartening message to a capacity crowd that she described as “the fiercest warriors there are, the people that make a difference in so many lives every single day, who are too often under-thanked and under-appreciated: […]