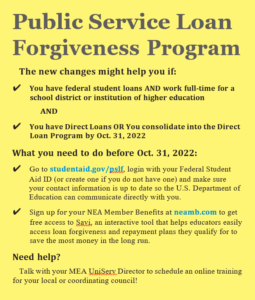 Following an October announcement of changes to the federal loan forgiveness program for public service employees, Hall had emailed a technical question to the loan servicing agency about her application. She opened the reply in late November while riding in the car with her husband.

“It simply said, ‘Your loans have been paid in full,’ and it gave a particular date, so I immediately went on the FedLoan Servicing website and saw that – sure enough – both of my loan categories had been marked as $0 remaining.”

The 20-year Hopkins kindergarten teacher had been expecting to qualify based on the changes, but she heard that notifications might take 90 days to process. “I wasn’t expecting to hear anything until the end of February,” she said.

“I couldn’t believe it. It was amazing – such a gift – and I was so proud of myself for sticking with it. I just texted my mom, and I was like, ‘I can’t breathe.’”

Not only did Hall see $89,000 in remaining student loan debt wiped away, but she also got a $250 rebate for payments she made beyond 120 qualifying payments. Before October’s changes were announced by the Biden administration, Hall was on track to qualify just over three years from now.

Now she’s helping other educators – some who’ve never applied before – get in on the one-year waiver  that closes next October 31, 2022. One teacher colleague who has been teaching more than two decades and has kids of his own in college is applying for the first time and by following directions should see his remaining debt removed plus a rebate check.

“It worked for me, and it will work for lots of people in my boat,” Hall said, adding that she went to MEA trainings and used the Savi tool made available for free to NEA members for navigating the program.

Dramatic changes were made to the Public Service Loan Forgiveness program (PSLF) thanks to lobbying by NEA members across the country. In 2020, more than 170,000 messages were sent by NEA members to the Biden-Harris administration appealing for the program to live up to its promise.

Now the program will accept more kinds of payments, including late payments, since the program’s inception in 2007; additional repayment plans; and more types of loans.

MEA UniServ Director Jon Toppen, who leads trainings on PSLF for MEA members, said he’s seen many educators struggle to get through the program’s “very small hoops.” But advocacy efforts were derailed when Betsy DeVos was Education Secretary and maintained a 98% rejection rate for applications over the previous four years.

“This is another example of why elections matter,” Toppen said. “The concerted effort to get people elected that are friendly to public education certainly makes a difference.”

MEA member Geoff Nash is one of those members who had been frustrated by the program. A few years ago, he checked to see if he was on track toward getting rid of his remaining student loan debt under the program when he reached 10 years of working in a public school.

The answer he got after registering in the system – like many others who made years of student loan payments in good faith – was “No.” He had the wrong type of loan and would need to consolidate into a different kind that met the program’s narrow criteria for acceptance. He did, and started over.

When the changes were announced, Nash – a second-grade teacher in Allegan – had made 29 months of qualifying payments since his start-over, with $67,000 left to repay. Suddenly an additional 42 months of payments qualified. He believes another 20 months of service at a public charter school might qualify when he submits the paperwork.

“I was delighted,” Nash said after receiving notification from the program. “It was a total boost. I’m now looking at possibly two and a half more years and I can be out from under this debt and not have to worry about it anymore.”

An estimated 550,000 public-service workers nationwide who had already registered in the system immediately saw their progress toward PSLF grow by an average of 23 monthly payments. Another 27,000 borrowers in the system were expected to receive $2.82 billion in forgiveness if they certified additional periods of employment.

All borrowers who want to be considered – even those who have not registered for the program before – must apply through a limited waiver, available through Oct. 31, 2022. That makes it important for anyone interested to enroll now—even before reaching the 10-year mark, said MEA UniServ Director Christine Anderson, who also runs webinars for MEA members on how to apply.

“Get everything in right now,” she advises. “The program up until now has been set up for your failure, but now it’s set up for you to succeed. This is a one-year window for those who have been denied or haven’t even tried because they had the ‘wrong’ type of loan or payment plan.

“They’re even offering rebates. So if you’ve made more than 120 payments, they’re sending you money back on those extra payments.”

For MEA member Charles Miller, who has been teaching and paying on student loan debt for 20 years,  the changes mean he should now be immediately eligible to have close to $17,000 forgiven from his original total of $51,000.

“It really is kind of—I hate to say game-changer, but it really is,” the Fenton science teacher said. “I can’t begin to put into words what it does for me after so many years where every financial choice came with this burden of, ‘Well, I’ve got to make sure it fits within this budget.’”

Next Miller would like to see a loan forgiveness program address the educator shortage by offering forbearance for 10 years and then forgiveness – with repayment required for those who leave before that.

“Whatever we can do for those new folks in the classroom to lighten their load, it’s imperative we do so,” he said, noting his school will likely go all year with an open science teaching job. “If we’re going to continue attracting top talent and keep the people we have, we’ve got to get more creative.”

Contact your local UniServ Director with questions or to schedule a virtual training for your local or coordinating council.

In February, MEA released a statewide survey of nearly 2,600 educators, with the vast majority of those surveyed saying the state’s acute educator shortage and its impact on students is the most pressing issue facing Michigan schools. Ninety-one percent of respondents said they were extremely or very concerned about the educator shortage, followed by concerns […]

Aspiring Educators of Michigan (AEM) members promoted March is Reading Month with a unique program motivated by a desire to show that even small efforts toward social justice can have a big impact. Supported by an NEA Create grant, members of the AEM Social Justice Committee demonstrated their dedication to both literacy and advocacy in […]