All seven past and current presidents of MEA Local 1 were on hand for a recent celebration of 41 years since the 1978 formation of the Multi Association Bargaining Organization (MABO) representing more than 5,000 educators in Macomb, Wayne, and St. Clair counties. 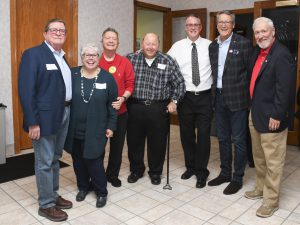 Leaders, members, and staff from past and present crowded into the organization’s Clinton Township office last week for the 40th + 1 anniversary. The celebration was delayed one year because of last year’s focus on the important 2018 general election.

By banding together, educators from 17 school districts have worked to improve collective bargaining to maintain the appropriate dignity and status for members, whether it was supporting striking educators in the 70’s, 80’s, and early 90’s or fighting to properly fund all public schools.

“Now after a decade of constant attacks on public education and public educators, Local 1 is celebrating because we are still here and still fighting to improve public education for our members and for our communities as a whole,” said Local 1 president John Duffy.

Local 1 was founded as a direct result of ongoing intimidation tactics being employed by districts throughout the state that included teachers being fired en masse in the Reese School District in 1971 and the Crestwood (Dearborn Heights) district in 1975.  By working together, the school district presidents of Local 1 were able to support each other to help with bargaining fair and equitable contracts.

MEA President Paula Herbart joined the festivities to thank the many mentors who helped her develop as a union leader from her beginning years as a Fraser music teacher and building rep. “I stand on their shoulders,” she said.

“When I am at the state level and talking to people who make decisions that affect the lives of our members, you are with me eternally,” she told the crowd.

Local 1 has seen dramatic changes to public education over the last 41 years and celebrates its anniversary more hopeful than ever that the tide is turning in favor of improving public education.

“Unionism means respect, and that’s why we continue to fight for it every day,” said former Local 1 President Mike LaBuhn, who lead the MABO from 2006-10.

Click to view online. In this issue: Letter to Members: You are the Strength in Union Above and Beyond: Retired educator Pam Kellar Nominations sought for ESP Caucus Board My View: Eclipsing Restoration with New Growth Savoring a Win for the People Push is On for Changes to Evaluation System Legislative Councils: a case study […]

Love ultimately led MEA member Tavia Redmond to don her teacher’s cape 28 years ago. Since then, she’s faced tough challenges with grit and patience—mostly in her hometown of Romulus, the Downriver suburb that is home to Detroit Metropolitan Airport. But nothing compares to this year’s struggles, she says. “This right here is a whole new […]