As a self-described “Harry Potter nerd,” MEA member Ashley Calhoun has brought a bit of magic to her hometown of Homer, where she is now finishing her fourth year of teaching fourth grade. 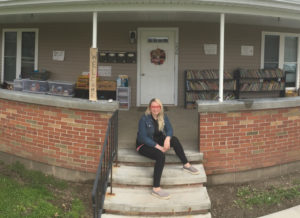 When the global COVID-19 pandemic forced school buildings in Michigan to close in March, Calhoun was shaken with worry about students she knew did not have all of the resources they needed for an unexpected, extended stay at home.

“It freaked me out thinking that all the kids who find safety and security and meals and love from school wouldn’t have it for such a long time.”

She acted on those concerns in the spirit of Albus Dumbledore, beloved headmaster of the Hogwarts School of Witchcraft and Wizardry in the seven-book Harry Potter series she loves. Dumbledore tells students in Harry Potter and the Goblet of Fire: “We are only as strong as we are united, weak as we are divided.”

With help from her fiancé and her brother, and permission from her principal and superintendent, Calhoun re-entered the elementary school where she works – across the street from her house – to retrieve books from a free collection displayed on a bookshelf in the school’s foyer. 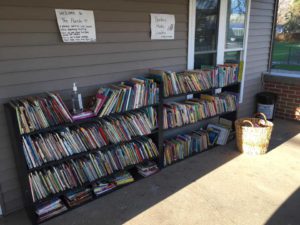 She and her helpers also grabbed food and other items from a supply closet and lugged all of the goods across the street to Calhoun’s porch. There she set up a spot where local families can get free books, food, school supplies, and toiletries – some of which she and other school employees and administrators supplied.

The location is convenient for parents who stop at Lillian Fletcher Elementary School to pick up free breakfasts and lunches being assembled and distributed at the school. But Calhoun’s hours are not limited to the school’s meal distribution times on Mondays, Wednesdays, and Fridays. 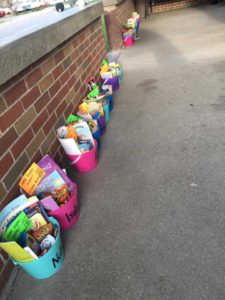 “We have people here at different times of the day – whether it’s 7 a.m. to pick up some food before they go to work or 6 at night to grab a workbook for their kid the next day,” she said. “It’s come when you want and take what you need.”

Once the community discovered Calhoun’s giving spot, the donations began. As soon as goods are taken, more arrive to refill the stock, she said. “I work in the greatest place in the world! We have people who donate things every other day—so someone takes 15 books, and there’s 20 more that come the next day to replace it.”

Even the Easter Bunny got in on the act – leaving baskets and individualized notes for children before the holiday.

Like any good teacher, Calhoun has her rules posted: Before touching anything, folks are asked to sanitize hands using any of five hand sanitizer bottles stationed across the wide porch. Books are for keeping, not lending. Finally, donors are requested to leave items in bags on the floor. 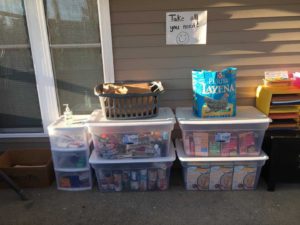 “My fiancé and I sanitize everything and we put it back out,” she said.

The operation works on the honor system. No one monitors the porch, and no problems have arisen – though at times Calhoun sees a head floating past her window and can’t resist peeking to see if one of her students is there.

“On occasion I’ll see a student and just rip open the shades and smack [kisses] and wave, because I just miss them so much!” she said.

Remote learning for students in Homer draws assignments from a blend of online videos and websites plus grade-specific workbooks. A weekly teleconference with her class is mostly a fun check-in to “fill up our batteries,” she said. “It feels good to see each other for sure.”

All of the Homer staff is doing all they can for students during this difficult time, she said. “We have people creating online lessons, sharing resources, watching kids, passing out meals.”

Calhoun exemplifies the message on a sign hanging above the bookshelves packed with free books on her porch: “Readers make leaders!”

Born and raised in Homer, Calhoun is the small-town girl who left, made good, and returned. A star softball player, she continued playing while earning an associate degree at Jackson College before transferring to Central Michigan University, where she discovered a new sport: Quidditch. 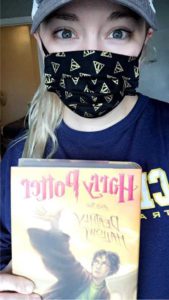 The real-life version of the fictitious sport played by Harry Potter and other students at the wizarding school, quidditch became a passion for Calhoun who quickly became a standout in the position of beater. Within a couple years, she was considered one of the best in the world.

Calhoun twice was selected for the U.S. Quidditch National Team and competed in the International Quidditch Association Global Games, earning a gold medal in Burnaby, British Columbia, in 2014 and a silver medal in Frankfurt, Germany, in 2016.

As a youngster, Calhoun says she lived in her school library and the public branch in town, and she credits teachers and librarians with constantly feeding her new titles and authors to satisfy her hunger for material. She discovered Harry Potter in fourth grade and was instantly hooked.

Now her classroom is outfitted in a Harry Potter theme, and she reads the first book in the series to her fourth graders each year. Afterward, she builds community with a sorting party, where she uses a sorting hat to place students into groups named after houses in the books: Gryffindor, Slytherin, Hufflepuff, or Ravenclaw.

“I find a lot of students buy into this and love the teamwork aspect of earning points for their house where they can win special prizes,” she said.

Teamwork is also what has made her porch supply operation a success amid unprecedented challenges and devastating uncertainties faced by people in Homer and all over the world, Calhoun said.

“This community has been amazing. Everyone is mourning and working through this in a different way, but I think it’s been a great thing for people to come together a little bit. Those who feel like they want to help can, and those who need help can get it.”

Once again, Calhoun’s sentiments nicely echo those of headmaster Dumbledore in Harry Potter and the Prisoner of Azkaban: “Happiness can be found in the darkest of times, if one only remembers to turn on the light.”