Three MEA members—a bus driver and two teachers were honored with association awards during the MEA Winter Conference in February and the MEA ESP Statewide Conference in March. 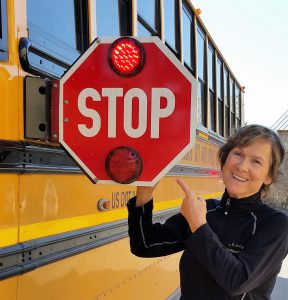 Marti Alvarez won the Leon A. Brunner Award for her work on behalf of students and union members in her roles as a bus driver and union leader. Alvarez makes a distinction between her job at Traverse City Area Public Schools and her reason for being.

She is employed as a driver, but she is driven by a goal to help students be successful human beings—a message she spreads to colleagues doing every type of work in schools, whether it’s serving food, running an office, cleaning classrooms, or any other task.

Last spring, when a handful of elementary students received a six-week suspension from their morning buses for misbehavior, Alvarez proposed a solution that would keep them in school. She offered to drive them separately in a TCAPS van.

“One fifth-grade boy came to me, practically in tears, saying ‘We’re not going to make it to middle school,’” Alvarez recalled. “These were at-risk kids, and there was nobody at home who could transport them.”

She understood the children—one as young as kindergarten—needed consequences for breaking the rules, Alvarez said. But she also knew any discipline that removes the students from school increases the likelihood they will drop out or get in more trouble in the future.

“If we can walk in the students’ shoes a little bit, we can be a part of their success story.”

Alvarez had a similar problem-solving reaction a few years ago when a kindergartener boarded the bus with painfully cold feet after waiting at a stop in sub-zero temperatures with no socks on.

She credited NEA and MEA leadership training for giving her the confidence to do more than cry about the sad situation. She organized a community sock drive, coordinated by school bus drivers, which brought in thousands of pairs of socks for students in need.

Alvarez has taken advantage of many training opportunities through the union, including the Minority Women’s Conference, Emerging Leaders, Powerful Public Speaking and ACE Childhood Trauma Training.

“It really started to open my eyes about the professionalism of the positions we have,” Alvarez said. “I started to know there is a higher purpose to what I was doing than driving the bus.”

Since then, Alvarez has developed her own training—Higher Purpose: Educators Employing Empathy for At-Risk Students—which she has presented in Michigan and at NEA events around the country.

She has served as TCTA secretary, union steward, MEA/NEA RA delegate, MEA/NEA board member, and Region 15A Coordinating Council Co-chair. The Brunner Award is given annually to an ESP who exemplifies outstanding commitment and significant contributions to the field. 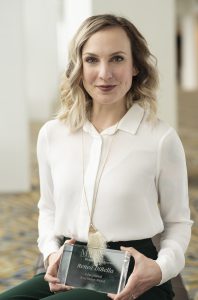 Renea DiBella received MEA’s Educational Excellence Award for her work as a teacher in the Individuals and Societies department at Scarlett Middle School in Ann Arbor. DiBella wrote the eighth-grade U.S. History curriculum at the Title I School, an authorized IB World School.

DiBella, who has been teaching for four years, believes education is a vehicle for making the world more equitable. In her class, students write their own constitution and track their progress against learning targets. Assignments and assessments involve student choice and relevance.

“By using connections between history and current events, I can ignite passion in my students about issues in their world,” DiBella said in her acceptance speech. “My goal has been to transform my classroom into a laboratory where students can practice using their constitutional rights, they can find out that their voices do matter, and they can get inspired towards making the world a better place.”

DiBella co-leads the Scarlett Queer Straight Alliance and helped oversee a student-led walkout against gun violence which grew organically from discussions in class. DiBella said her priority is to meet students where they are.

“I’ve had to transform my curriculum into both a mirror with which my students can see themselves and a lens with which they can see their world.” 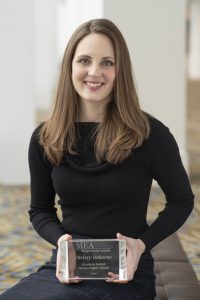 Christy Osborne received MEA’s Elizabeth Siddall Human Rights Award for her work as an ESL Coordinator and K-5 teacher in Royal Oak. Her participation in a Social Justice Project cohort through Oakland Schools led her to develop a “Social Justice League” in Royal Oak.

A 17-year veteran educator, Osborne leads the district’s ELL department, including curriculum and instruction, budget, and parent outreach. She has offered programs to better connect families to the school community and organized events to encourage multicultural awareness.

Osborne and the Royal Oak Social Justice League developed a vision for literature to enhance diversity instruction in elementary classrooms throughout the district. A successful grant recently allowed the purchase of hundreds of books.

In her acceptance speech, Osborne told the story of a young ELL student whose life was changed when she first saw a children’s book about her native Gambia in Osborne’s classroom. The main character had the same name—Isatou—as her second grade student, Osborne said.

“Isatou had never considered that it was possible to see her life and her culture and her name as important enough to be in a book. She had never heard a story about a strong, smart, black Muslim woman who changed the world for the better.”

Seeing the book led Osborne’s young student to stop hiding from her culture and begin sharing about it: “Because of one powerful story, a seven-year-old became an active part of our district’s equity work.”