Over the past 18 months, MEA member Nicole Haney has been heart-broken by images of immigrant children in detention – including those separated from their parents for no good reason – so she attended a
rally at the state Capitol to make her voice heard.
A new mother and Lansing-area instructional coach, Haney was too busy to act beyond that protest and calling congressional offices—or so she thought until a former teaching colleague out west began posting on social media about simple ways to take action.

Haney has worked as a teacher and reading interventionist in Waverly Community Schools since 2013. Before moving back home to Michigan, she taught in Arizona at a school with a large immigrant population for eight years.

“All I could think was that these were my students. I mean, I’ve heard their stories; it could have been them.”

As more reports emerged this spring and summer of immigrant children continuing to be separated from their families and held in inhumane detention centers, Haney began to imagine the trauma of having her one-year-old son Liam taken away. 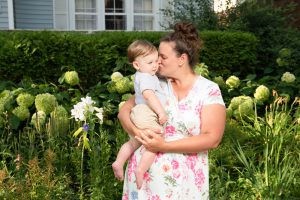 “It’s hard to even talk about,” she said. “You see these horrible things – just every story – and it’s hard to fathom. It’s gut-wrenching.”

At least 25 migrant people have died in U.S. custody over the past year, including eight children.

Ultimately Haney found the inspiration to act in her own front yard. Two years ago, she and husband Dustin bought a Lansing home previously owned by a gardener who planted varieties of perennial flowers that bloom from spring to summer.

As the blossoms emerged this year, Haney recalled a 10-year-old girl she follows on Instagram who sells flowers to buy Christmas gifts for children in need. “I looked around our yard, and thought, Maybe I could try selling some flowers on our porch and see what happens.”

Haney gathered up unused vases lying around the house and created some arrangements of cuttings from her yard which she advertised on a Facebook group of her westside neighbors. Those interested could take a vase of flowers and leave a donation.

She dubbed it Border Blooms, and soon she created a public Instagram account @borderbloomsmi to make sharing easier, and she started a PayPal account to allow for monetary donations. Since mid-July, she’s raised more than $700 selling more than 80 bouquets.

“It’s been really wonderful to see all of the kindness that has come out of it,” she said. “I’ve met neighbors I didn’t know, and people have been donating vases and flowers. One local farm, Swallowtail Farm in Mason, donated a full bucket of gorgeous flowers I was able to use.”

A friend in Royal Oak shared Haney’s story on social media, and three boxes of donated vases arrived. All of the money raised has benefited Border Kindness, a California non-profit providing migrants, refugees, and the displaced with comprehensive services that include food, shelter, clothing and medical care.

“I keep thinking it’s slowing down and then it kind of picks back up,” Haney says of her fundraising venture. “I had a lady drop by the other day in our neighborhood, and we started chatting about what else we could do in the fall when there are no more flowers.” 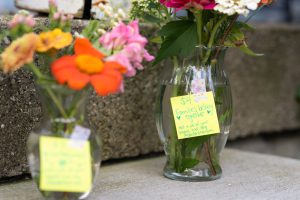 The two women discussed the possibility of working together to bake pies for donations. “I don’t know what will come of it, but a lot of people are feeling and thinking what can we do? I think it gives people a way of doing something and helping.”

It helps that flowers are beautiful and sharing them brings people joy, she noted: “It’s another way of spreading kindness.”

Recently, chaos and vitriol have dominated many school board meetings around the state and nation. Verbal attacks and threats of physical violence targeted at board members and educators have become far too common. What’s driving this angry rhetoric? Safety measures put in place to protect students and employees, as well as efforts to be open […]

EAST LANSING — The following statement can be attributed to MEA President Paula Herbart regarding the strike underway by Kellogg workers in their effort to settle a fair contract: “As an educator, I know a healthy breakfast is essential to student learning.  And I know many breakfasts that fuel our students’ education are made right […]