Katie Hillyard tried not to be an educator. 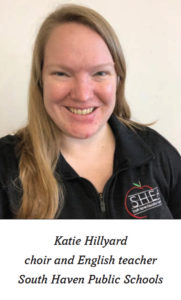 As a teen, the MEA member didn’t want to be just like her parents – both music teachers in the Grand Rapids area who are now retired. But when it became clear in college she was drawn to the profession, Hillyard followed her calling and today is finishing her ninth year in South Haven.

Now she knows she’d be lucky to become half the educator her parents were.

None of that is to say she will certainly finish her career as a high school choir and English teacher. Hillyard has considered leaving the job she loves for a variety of reasons most educators could relate to in MEA’s recent member survey, in which she participated.

“It’s all of the extras,” she said, going on to list a few examples: new mandates without time, resources or training to implement; a teacher evaluation system that is an exercise in time-draining hoop jumping; added workload that carries beyond the school day; and top-down requirements that actually get in the way of good teaching.

Rigid standardized tests, heavily weighted in teacher evaluations, are antithetical to good teaching practices, Hillyard noted. “Good teaching is adaptive and differentiating and accommodating. We are trained to do those things in our classrooms, and all of those things are not allowed on these tests.”

In particular, Hillyard says she has felt “weighed down by the demands on teachers,” which she describes in terms of the polar extremes that now frame beliefs about educators: Either educators are praised as superheroes or vilified as supervillains.

“It doesn’t acknowledge that we are all just humans trying to do our best and do what’s best for kids, and we’re fallible,” she said. “We’re not going to be able to fix every problem, and we’re also not the ones that are causing every problem.”

Her strength as an early career educator is in the relationships she builds with students, the cornerstone of good teaching, “and I think that’s especially what kids need right now with such a digital world that we’re in and with the way the last couple of years in particular have gone.

“That’s something I feel is a strength of mine – making connections with kids and helping them feel seen and helping them realize it’s OK to be who they are, no matter what that means for them.”

One of her biggest concerns surrounds students’ mental health, coupled with the lack of adequate numbers of counselors and other professionals trained to address it. More mental health professionals in schools would create a better chance of catching early warning signs and directing an appropriate response before it spirals into a crisis, she noted.

Meanwhile, educators are navigating their own mental health as they address students’ behavior challenges, social-emotional needs, and learning recovery. They are trying to keep kids on track and engaged in school amid higher absence rates and longer-than-average absences, Hillyard said.

“Teaching has always been hard, but I’ve noticed a lot this year that I need more recovery time, and my recovery doesn’t last as long,” she said. “A weekend gets me through to maybe Tuesday. I’ve heard it from my colleagues, too, the Friday exhaustion is happening a lot earlier in the week.”

MEA would like to congratulate the hundreds of friends of public education who won their elections on Nov. 8.   We look forward to working with lawmakers to ensure every Michigan student gets the great public education they deserve! The following MEA recommended candidates were successful in Election 2022 (* denotes MEA member): Statewide (15 wins […]

EAST LANSING — With absentee ballots for November’s general election going out this week, MEA is proud to announce candidates who have earned the recommendation of MEA members through the union’s Screening & Recommendation process. The process, which looks at candidates’ positions on education and labor issues, is decided by MEA members who serve on […]