Steve Galvan wants people to understand educators are on the front-lines just as health care workers have been, “and we too are digging our claws deep into the dirt and holding our ground, because those students need us now more than ever,” he said. 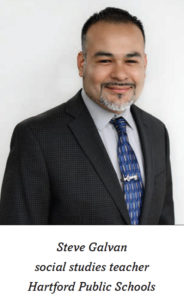 “Our students may not come from a two-parent home. They may have to deal with food insecurity or their parent’s job loss, having a family member die from the virus, or homelessness. They walk into the school building already dealing with all of these things.”

The MEA member speaks from experience. His parents were undocumented immigrants who made the difficult trek to southwest Michigan from Mexico and worked hard in agricultural jobs despite limited education “to provide me and my siblings the American Dream.”

The 14-year Hartford schools veteran has been giving back since his college days working at a preschool for children of migrant farm workers while working on his degree. He hopes lawmakers will hear the pleas from him and other educators who participated in the recent MEA Member Survey.

The policy focus should be on ideas such as rebuilding pay and benefits, helping aspiring educators pay for college, reducing certification and professional development costs—not confining teachers in scripted curricula or forcing them to post lesson plans and materials one year in advance, Galvan said.

“In Michigan and a lot of other states, bills are being proposed to become law that would really hinder the education sector. Instead, they should allow us to do what we have been trained for and what we do best, and that’s teach.”

Galvan knows the power of educators. A language barrier forced him to repeat kindergarten, and he recalls feeling set aside by a teacher frustrated by his lack of English skills. But educators also inspired him toward the profession with guidance that helped him become a first-generation college graduate.

One influential educator was his middle school social studies teacher and football coach who “always stayed on me, so much at times that I felt he was annoying. Years down the road you realize those that were hardest on you cared the most. He wanted to make sure I succeeded in every phase of my life.”

A middle school English teacher who gave him a leg up “helped me go to college visits, showed me how to apply for college and how to fill out the FAFSA (federal financial aid) form, because all of that information was new to me and I didn’t know how to do it.”

As a teen, Galvan acted as translator for his parents at doctor appointments and through the process of becoming resident aliens and getting green cards. Then he realized his father could not read – a problem often hidden in his culture, he said.

Never having a Latinx teacher or professor made it difficult to find connections, another factor that drew him to education and a subject area that spreads awareness of different cultures, languages, and geographies, he said. “I just wish there were more Latinx educators out there.”

That wish underlies the desire of Galvan – who holds a master’s degree in educational leadership – to become a school administrator. “I will miss the classroom, but I can have an impact as a school leader by pulling two cultures together, bridging that gap, to bring our community much closer together.”

Meanwhile, he serves on the board of his Latinx college fraternity and has started his own mentoring program at Hartford High School – where he graduated from and now teaches – to help students in the way he was helped.

He always remains focused on the whole child, he said, not just curriculum, instruction and assessment, because he knows “if we don’t fulfill the social-emotional piece – especially now – we can’t achieve anything else.”

Here’s a Lesson on the Educator Shortage

One thought on “Educator Appeals: ‘Let us Teach’”