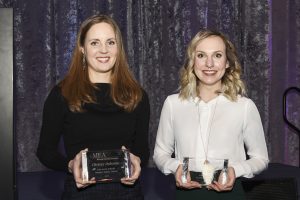 One teacher focuses on student engagement and empowerment through study of history and the U.S. Constitution. The other promotes acceptance of students’ social and cultural identities through multicultural learning and family outreach.

Renea DiBella received MEA’s Educational Excellence Award for her work as a teacher in the Individuals and Societies department at Scarlett Middle School in Ann Arbor. DiBella wrote the eighth-grade U.S. History curriculum at the Title I School, an authorized IB World School.

DiBella, who has been teaching for four years, believes education is a vehicle for making the world more equitable. In her class, students write their own constitution and track their own progress against learning targets. Assignments and assessments involve student choice and relevance.

“By using connections between history and current events, I can ignite passion in my students about issues in their world,” DiBella said in her acceptance speech.

“My goal has been to transform my classroom into a laboratory where students can practice using their constitutional rights, they can find out that their voices do matter, and they can get inspired towards making the world a better place.”

DiBella co-leads the Scarlett Queer Straight Alliance and helped oversee a student-led walkout against gun violence which grew organically from discussions in class. DiBella said her priority is to meet students where they are.

“I’ve had to transform my curriculum into both a mirror with which my students can see themselves and a lens with which they can see their world.”

Christy Osborne received MEA’s Elizabeth Siddall Human Rights Award for her work as an ESL Coordinator and K-5 teacher in Royal Oak. Her participation in a Social Justice Project cohort through Oakland Schools led her to develop a “Social Justice League” in Royal Oak.

A 17-year veteran educator, Osborne leads the district’s ELL department, including curriculum and instruction, budget, and parent outreach. She has offered programs to better connect families to the school community and organized events to encourage multicultural awareness.

Osborne and the Royal Oak Social Justice League developed a vision for literature to enhance diversity instruction in elementary classrooms throughout the district. A successful grant recently allowed the purchase of hundreds of books.

In her acceptance speech, Osborne told the story of a young ELL student whose life was changed when she first saw a children’s book about her native Gambia in Osborne’s classroom. The main character had the same name – Isatou – as her second grade student, Osborne said.

“Isatou had never considered that it was possible to see her life and her culture and her name as important enough to be in a book. She had never heard a story about a strong, smart, black Muslim woman who changed the world for the better.”

Seeing the book led Osborne’s young student to stop hiding from her culture and begin sharing about it: “Because of one powerful story, a seven-year-old became an active part of our district’s equity work.”

Jackie Shelson and Taryn Loughlin have accomplished a couple of cool firsts in the Grosse Pointe Education Association they lead. The pair became the first co-presidents of the GPEA in 2021, and they worked out a first-of-its-kind agreement with the district to include free professional development with the assistance of MEA UniServ Consultant Chad Williams […]