Chuck Waldroup signed up to be a bus mechanic seven years ago with Inland Lakes School District, but to his surprise a driver shortage placed him behind the wheel in a permanent second role. 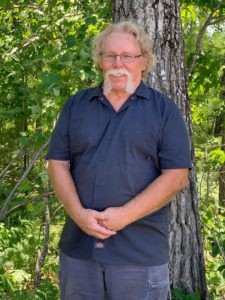 What was your reaction to unexpectedly becoming a bus driver?

I thought it was going to be a nightmare with kids misbehaving, and from riding with somebody else to learn the route a couple times, I picked up some kids’ names because they were the mischievous ones. Then after about a week and a half I thought, the only kids on here that I know their names are the kids that get in trouble, and that’s not right. So I looked at the stops and looked through PowerSchool and started calling every kid as they got on and off by name. So once you connect on a personal level with them, you find out some kids are from less fortunate families and stuff like that. Then you can figure out how to treat them for their behavior.

What works best for misbehavior?

Talking to them like they’re human beings. Not looking down your nose at them, which is easy to do as an adult, because you think, I know more than they do. They need to listen to me. They need to respect me. But we have to respect them, too.

What else do you do to connect with your kids?

I’ll talk to them when we’re driving down the road. I dress up for Halloween. I try to dress up for all the holidays. I’ve got a leprechaun thing I wear for St. Patrick’s Day and Santa hats. Last year I put on bunny ears and whiskers that I made, and I made my own cottontail for Easter, and I give them little treats. Last day of school I give them something. Just try to make the ride more enjoyable and they behave better that way.

How many kids are on your bus? And what ages?

I think we’re about one of the only schools that actually buses preschoolers. So I have from four-year-olds to eighteen-year-olds. And my route is one of the fuller routes. I run on average 60 kids a day. Sometimes up to 75, 76? My route is—mileage-wise—about 35 miles, and my bus is the last one in every day. We leave school at about eight minutes after 3, and I get back at 4:30.

What have you been doing during the coronavirus building closures?

I’ve stayed busy doing the repairs on the buses that I can’t normally do when we’re running. And then on the bonus side, being at the school, I get to help with food distribution for the kids every Wednesday.

Why do you say that that’s a bonus?

Because I at least get to see a couple of the kids. And you stand six to eight feet away, but you get to talk to them and it makes them happy. I still give them treats. I buy stuff myself, and coming up the union donated funds and we’re putting goodie bags together to say, “We miss you,” from the teachers and the aides and the bus drivers. The bags will have a puzzle and some wildflower seed packets and a candy treat for each kid.

I love that you initially thought you didn’t want to be a driver, and then you missed it when that part of your job temporarily went away.

It’s weird because you get used to the kids and it’s like a big family. Like I said, there’s the less fortunate ones. I always try to help them out and try not to be obvious about it more than the other kids. A lot of them live far away from anyone. I worry because these kids that were already going through not the best situation in life, when they have to sit at home it makes it even harder for them. I’m just glad if I can help.

I’m sure they appreciate it, too.

Like I said, I’m going on three years of driving the route and when I first started, some of the kids, you couldn’t get them to behave for nothing. And now those kids, because I would sit and talk to them, are some of the best-behaved ones on the bus. I don’t have any rowdy kids on the bus anymore at all.

MEA member Brian Dalton learned how to survive a difficult endurance event while training to compete in four Ironman races in his 40s, and he discovered it wasn’t much different from strategies he used as an educator to successfully make it through a school year. Just as in a brutal race involving a 2.4-mile swim, […]