“Our public schools cannot be a casualty of COVID.”

Those words from U.S. Sen. Gary Peters—during a May virtual rally for federal education funding to help avoid pandemic-driven cuts—encapsulate why he is MEA’s recommended candidate for Senate this fall. 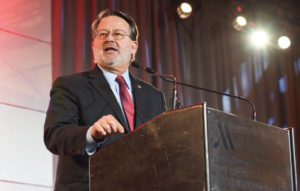 A graduate of public schools and the son of a Rochester educator, Peters has served Michigan in the State Legislature and the U.S. House and always been a steadfast supporter of public education. Throughout this pandemic, his work in the U.S. Senate has been focused on working across the aisle to get help for his state, including critical support for workers and students.

During his six years in the Senate, he’s also been a consistent opponent to fellow Michigander, U.S. Secretary of Education Betsy DeVos, and her anti-public education agenda.

Peters voted against DeVos’ confirmation in 2017 and has been standing up to her ever since, including her lack of transparency on federal funding for failed charter schools.

“Rather than giving students choices, each charter school that closed or failed to open meant that communities missed out on more than half a billion dollars in resources that could have benefitted neighborhood schools,” Peters said in 2019. “As Secretary of Education, I expect you to put students first and ensure that Michigan families’ hard-earned tax dollars are being used appropriately. But, your Department’s stunning lack of oversight of this charter school program has instead left students and their families worse off.”

By contrast, Peters’ opponent, businessman and failed 2018 Senate candidate John James, has praised DeVos, saying she’s doing a “very, very good” job, according to JohnJamesRevealed.com, a site dedicated to sharing the truth about James and his record.

The DeVos family has rewarded James for his support by spending nearly a million dollars to prop him up—making him one of their top candidates this cycle. Six members of the DeVos family were the only contributors of donations totaling $800,000 to the Better Future MI Fund which formed on Oct. 31 last year with a focus on unseating Peters, according to the super PAC’s first campaign filing on Jan. 31.

One thought on “Sen. Gary Peters deserves your support for re-election”

The new Michigan Independent Citizens Redistricting Commission – created by the Voters Not Politicians 2018 ballot measure – is holding hearings to help develop new legislative district maps for the next decade. For the first time, residents can provide input about how voting boundaries are drawn, including regarding “communities of interest” that are important for […]