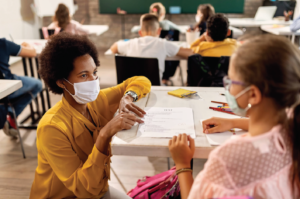 MEA member Ryan Ridenour has never known a teacher evaluation system other than the one used in Michigan since 2015. Still the world history and psychology teacher, in his sixth year at West Bloomfield, has found key problems with the state’s method for scoring, rating, and ranking educators.

“I know the modern education system is obsessed with data analysis, but data is only useful if it’s valid,” Ridenour said. “I kind of roll my eyes when I see people refer to student growth data as objective, because if you’re an educator you know that’s not true.”

In rating educators based on students’ test scores, “There’s a lot of subjectivity,” he said—from choosing a data collection method, to setting the proficiency bar, to determining what counts as “adequate” growth and how much value the teacher added to the equation.

States across the political spectrum are backing away from requirements for documenting student growth as part of teachers’ evaluation scores out of concerns about accuracy and intensifying pressures to teach to the test—which discourages deeper learning and critical thinking.

Two bills in the Michigan Legislature would reduce or eliminate the use of standardized assessments and student test scores in teacher evaluations. Without legislative action, the student growth portion increases from 25 to 40% this spring—a change delayed over the past two years.

Sen. Ken Horn (R-Frankenmuth) has introduced Senate Bill 56 to drop the student growth piece altogether in recognition of the diverse strengths, learning styles, and needs of students which educators must work to address every day.

“When we use a cookie-cutter approach and a one-size-fits-all approach to testing and evaluating, that does the kids no favors and it certainly is no good way to evaluate a teacher,” Horn said in an interview.

In the other legislative chamber, House Bill 4032 would permanently return the percentage of an educator’s evaluation that is tied to student growth measures to 25%.

“What we’re looking at now in negotiations with some of our stakeholders—educators, administrators, lawmakers—is bumping it back to 25% but eliminating M-STEP as a mandatory portion, allowing districts some flexibility in what tests they use,” Horn said in late February—and negotiations continued as of press time.

A former Saginaw County commissioner and restaurateur, Horn described the M-STEP—which replaced the MEAP as Michigan’s statewide assessment after the adoption of Common Core State Standards—as a “flawed tool” for assessing the work that happens in classrooms.

“What we need to do is take a holistic look at this system and say from the ground up, is this the right way to evaluate teachers?” Horn said.

With the elimination of teacher tenure at the outset of GOP-led evaluation reform in 2011, scores from teacher evaluations rank and sort individuals for layoff and recall—a high-stakes approach at odds with the growth and development focus built into state-approved observation tools.

“With this point system, there’s no longer teamwork,” said Clements, who also serves as a Bay City commissioner. “There’s no longer colleagues and camaraderie. It’s everybody for themselves, survival of the fittest. I have to worry if I help someone, they might score a point higher than me, and if we’re seeing layoffs—I could be the one.”

Educators have decried evaluation changes made over the last decade as yet another factor driving teacher shortages in Michigan. In surveys, interviews, conference work sessions, and contacts with lawmakers, MEA members have called for legislative fixes to the issues.

Educators are fleeing the profession in part because of dwindling respect evidenced by an evaluation process that takes tens of hours to complete, requires them to amass mountains of data to prove they’re doing their jobs, and produces ratings that do not accurately reflect their effectiveness, said Birch Run Education Association President Amy Urbanowski-Nowak.

That has been the case for MEA member Jennifer Hockstra, a math and science teacher who started her 11th year of teaching in Montcalm County last fall but took a leave of absence in November from the stress, shrinking pay and benefits, and rising expectations.

She described the evaluation system as “soul crushing” and said she does not know if she will return to the classroom despite her status in two high-shortage subject areas. She has taken a remote job as a vaccine scheduler at a health system where her take-home pay is higher and she pays lower health care premiums.

“I can tell you I’m a great math teacher,” Hockstra said. “Intrinsic motivation is my thing. I will do my best every single time just because. But it’s unfair for me to be graded on things that are totally outside of my control.”

In addition to reducing the weight of student test scores in educator evaluations, MEA has been advocating for the following improvements:

Similar changes were proposed in the past two years by an education stakeholder work group—comprised of superintendents, school board lawyers, and staff from MEA and the Michigan Department of Education (MDE)—discussing ways to improve the system.

“Then the pandemic hit and everything got put on hold,” said MEA UniServ Director Tammy Daenzer, who served on the workgroup and leads an MEA staff cadre that provides training to union locals on the evaluation law’s requirements. “Now we’re bringing it back around again.”

With decisions up in the air around this year’s testing requirements and how they will relate to evaluations based on the disruption of the health crisis, focus also must remain on systemic problems that predated the pandemic—and will stretch beyond if left unaddressed.

At this early career point, West Bloomfield’s Ridenour says he would like to see change. While he enjoys the part of his evaluation where a skilled administrator gives him developmental feedback based on observation, the emphasis on test scores is not good for educators or students.

“If you ask teachers what learning needs to be targeted, what are the problems and where are the struggles, they already know,” Ridenour added. “That’s a big part of the job. They don’t need standardized test data to tell them.”

Sen. Horn agreed but acknowledged much work that is needed to convince his GOP colleagues that “it’s not necessarily our role to dig that deep into the classroom. It breaks the bond between teachers and students, and we should be strengthening those, not breaking them.”

MEA is urging members to contact their representatives and senators about the student growth bills already introduced, as well as other priorities for improvement in the evaluation system.

In addition to long-term fixes that are needed—given pressures related to the pandemic—educators and their districts need immediate flexibility this year to streamline evaluations to not waste precious time on burdensome paperwork and process. While evaluations can be an important tool for providing constructive feedback to educators, the reality of the current teaching environment needs to be acknowledged. Should evaluations be deemed unnecessary at the local level, there should be flexibility to bypass them this school year.

Go to www.mea.org/legislation for the latest calls to action based on what’s happening at the Capitol when this edition of the magazine arrives in homes.

As MEA pursues fixes to problematic teacher evaluation reforms enacted in 2015, bargaining teams in some districts have had to contend with a legislative change from 2017 that seeks to add more weight to already high-stakes evaluation scores. At the state level, MEA’s bargaining wing has developed prototype contract language to knock down the threat, and many […]