Theresann Pyrett has taught at West Ottawa Middle School for 11 years. She has seen educators demonized, public schools attacked, and the values that led her to become an educator dismissed by elected officials who have never taught a class. They have never driven a bus. They have never served a school lunch. They have never comforted a distraught student.

But Pyrett has also seen the positive impact school employees can have when they have a seat at the table.

This November, she will see Kim Nagy, a music teacher at Northview Public Schools, on her ballot. Nagy has stepped up to run for state Senate, and Pyrett will have the opportunity to help put her in “the room where it happens.”

Students need support from our leaders, and educators need champions now more than ever. Public school employees across the state have answered the call.

Twelve current or former public school employees across Michigan emerged victorious from primary elections over the summer and will appear on General Election ballots with a seat in the state Legislature on the line.

This November, hundreds of thousands of school employees will make their voices heard in critical elections across the state. Like Pyrett, many of them will have the opportunity to cast their vote for fellow educators.

“Having more educators serving in the legislature would mean that those in our schools –  students, teachers, support staff, and administrators – would have a stronger, much-needed voice at the Capitol,” said state Rep. Matt Koleszar. The former Airport EA President is running for his third term representing western Wayne County and hoping to bring more supporters of public education with him to Lansing.

“Educators have been there. We have been directly affected by missteps in Lansing. Many of these poor policies were put into place by those who have never stepped foot in the classroom. We need the voices of those with experience in the classroom to right those wrongs and make sure they never happen again.”

“The politicization of education has resulted in unprecedented attacks on teachers, students and staff,” said Shannon, who formerly taught in L’Anse Creuse. “More educators in office will add voices of reason while some other legislators seek to attack public education. We need more educators in Lansing to help defend our teachers and students.”

Four MEA members – Koleszar, Shannon, state Rep. Lori Stone and state Sen. Dayna Polehanki – are currently serving and up for re-election. Several fellow MEA members across the state are following suit and seeking their first term in state office with hopes of joining their union sisters and brothers at the Capitol.

Jaime Churches, a fifth-grade teacher in Gross Ile, is one of those hopeful candidates. She is running for a state house seat representing Downriver Wayne County. If successful, she will have the opportunity to continue to serve her students and their families every day – but now from the Capitol instead of the classroom.

“I am running for office because I believe in my students and the Downriver community,” Churches said. “I’m tired of feeling helpless because of decisions in Lansing that are made for us and not with us. I want to turn up the volume on the voices of educators that show up for our kids every day. I want to be an example to my students that when you see something that’s wrong, you stand up for what you know is right.”

The continued attacks on educators over the past decade have given rise to an equal and opposite reaction. Recent elections have borne a groundswell of school employees running for office – a political movement not seen since 1964, when 17 teachers were elected to the state House and created protections for public school employees to bargain collectively.

“I decided to run because I wasn’t happy with the way things were going and I couldn’t just sit around and let stuff happen, especially with regards to education,” said Anthony Feig, a professor at Central Michigan University and candidate in the 92nd House District.

“Look, we don’t have any higher education professors in Lansing,” Feig said. “As someone who trains science teachers, I’m tuned in to what’s going on with education and the challenges aspiring educators face.”

Churches’ decision to run for the state House materialized on a cold December afternoon in 2019.

“I asked my students during a lesson to write their dreams down on a paper plate,” Churches recalled. “If they could be anything, if they could do anything, tell me what and why. I sat after school and I read those one day, and I was like, ‘Wow, these are amazing.’”

“That made me think, ‘What would I want to do?’ I wrote my own dreams down on a paper plate too. ‘State Rep’ was the scariest one, the one I was most afraid of. I sat with it for a while. I did a lot of soul searching and I thought, ‘This is it. I am going to do this. Here is my way to make a bigger impact.’”

The state representative she is running to replace, Darrin Camilleri –– who is now running for state Senate –– was enthusiastic about what Churches would bring to the role of lawmaker.

“Jaime Churches is deeply rooted in the Downriver community and will make an excellent State Representative,” said Camilleri, himself a former educator in the Downriver area. “She understands the importance of public education and will fight to ensure that teachers can succeed in the profession while also making sure that students can get the educational opportunities and career on-ramps they need to succeed in a 21st-century economy. It’s extremely important to have teachers and middle-class people representing us in Lansing—working families need representatives at the Capitol who actually understand the issues they face.”

Nagy, the music teacher from Northview and chair of the Ottawa County Democrats, worked tirelessly to recruit a viable candidate for her local state Senate race without success. Running out of options, she realized that if someone had to represent the values of her community, why not her? That may have been just the outcome her fellow Democrats were hoping for when they asked her to lead the search for a candidate.

“I was unwilling to just let this race go without a fight,” Nagy said. “When our current senator supported a bill requiring teachers to post detailed lesson plans prior to the start of the school year, it was clear he doesn’t understand anything about our schools. As a lifelong educator, I do.” 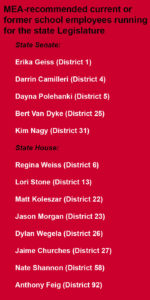 There’s work to be done

For those who prevail on Nov. 8, the work will have just begun. Public school allies have been in the trenches for years, fighting desperately to hold the line. With the prospect of reinforcements coming next term, many are ready to go on the offensive.

“There is still so much work to be done,” Koleszar said. “We still have a major teacher shortage. This shortage will not go away without action from the state that is truly supportive of students and staff alike. That action has been lacking in a Republican majority. I keep doing this because I truly believe in public education and want to continue to fight for it, but we need more allies in the legislature.”

The teacher shortage looms large over every discussion about education policy. It only makes sense that those who have been in the classroom should be at the table as officials work toward sustainable solutions.

Educators across the state are calling for those solutions to pair educator recruitment with retention.

“Attempts to funnel more aspiring educators into the profession without asking why veteran teachers are leaving is like trying to fill a leaky bucket,” Koleszar said.

“The biggest crisis of all is people are not staying,” Churches agreed. “They’re fleeing the classroom at alarming rates because of the lack of respect and support being given to educators. We have to start taking on these problems, and retaining talent has to be first.”

For many, maintaining the momentum of recent historic state education budgets is critical to their work to support educators and students alike.

“The education budget is the second largest budget in the State of Michigan,” Shannon said. “The more educators we have in office, the more seats we have at the table to decide how that money is spent. Over the past few decades, we have seen attempt after attempt to defund our schools and give that money to corporate interests.”

Those efforts to defund and privatize education have been led by disgraced former Secretary of Education Betsy DeVos, most recently through a thinly veiled voucher scheme to funnel public dollars to her billionaire friends. (Her deceptive “Let MI Kids Learn” ballot measure will come before legislators for their consideration this fall or next spring – learn how you can help stop it at ForMIKids.com.)

The DeVos family has already spent millions on the upcoming election attempting to buy seats for opponents of public education. Most notable of these DeVos candidates is Gov. Gretchen Whitmer’s opponent, Tudor Dixon, a failed actress who is now auditioning for Michigan’s most powerful office by reading a script written by Betsy DeVos.

Educators and their allies across the state are fighting back, supporting candidates who understand what it truly means to support our students and keep public dollars in public schools.

“I first started out with a passion to run for office because of the lack of investment in students and teachers in the public education system,” Churches said. “If we want to tackle our literacy problem, we need money to buy books and get reading specialists in every building. We need social-emotional learning resources. We don’t have the school staff that we need to address mental health. Our teachers need better wages and benefits for the tireless work they do.”

Funding is only a piece of the puzzle. Many pro-education candidates have very specific objectives they’re hoping to bring to Lansing if elected.

“My number one legislative priority it to repeal the third grade reading law,” Nagy said. “I believe that having additional support staff in terms of interventionist is important, but this law just adds layers of bureaucracy and punishes and teachers and students.”

Excessive standardized testing is another overreach commonly cited as indicative of a growing lack of respect for the profession among politicians.

“I love teaching, but I feel my ability to be the best teacher I can be is suppressed by all of the focus on testing and data and the lack of respect and resources for educators,” Churches said. “We need to respect educators as professionals.”

While educators currently in office take pride in the hard-won funding increases we’ve seen over the past two years, they have their eyes set on greater goals as more educators win legislative seats.

“The hard truth is that we have had to curb our expectations in a Legislature dominated by ultra-conservatives,” Koleszar said. “We have made some incremental progress, but I know I am not alone in having some truly ambitious ideas in my back pocket. I’m hopeful that I’ll be able to introduce those bills this January, when we have the votes we need to make them a reality.”

A public policy nerd since college, Lauren Jasinski always expected to expand her career beyond a high school classroom. But the devastating shooting at Oxford High School sped up her departure from teaching civics, world history, and AP Comparative Government. “I love working with high school students; I think I’m good at it. I’m incredibly […]

Jim Gibbons could talk for hours about all of the good things happening at Oxford High School, but one year after a horrific school shooting killed four students and injured eight other people, the local union president admits nothing has gotten easier. “Our students and our staff are resilient as all get-out,” he said. “We […]