LIKE MANY educators, Jennifer Gougeon-Catarino has always been a planner—independent and efficient at getting things done. A teacher friend once called her “Polly Positive” for her go-getter spirit.

“I was productive, and I was in control,” she said. “I thought I had my whole life planned out. Then this happened.” 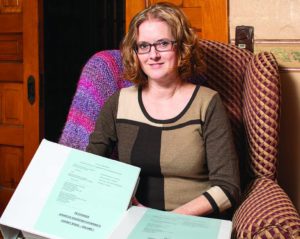 Four years ago, standing in the open doorway of her classroom to give instructions to her seventh-grade English students at Hillside Middle School in Kalamazoo, Gougeon-Catarino experienced a life-changing accident.

School was letting out 30 minutes early for bad weather conditions. Teachers were releasing students by the clock instead of a bell. She was reminding her kids to stay safe on the sidewalk and avoid walking in the icy street as many often did.

Suddenly, an over-excited student running past her room in the hallway slammed her door shut. Gougeon-Catarino absorbed the force in a blow to her head. Only the presence of several children gathered in front of her stopped her fall and averted her face from hitting the floor.

The brain injury she suffered on Feb. 24, 2016, would change her life’s trajectory.

“It was accidental, but because of a student’s bad choice in behavior, I was taken out of teaching. I did three years straight of vision therapy and occupational therapy and learned a great deal about the brain. I’ve had to adjust to a new normal.”

One boy’s momentary impulse would cost her the career she loved and plunge her into a lengthy and exhausting battle to secure a future for herself and her young son—a fight that MEA helped her wage every step of the way.

“I haven’t stopped singing the praises of the union,” she said. “I can’t imagine navigating all of this without someone else being there to support me. There was so much I didn’t know. Who to call for this? What form do I need for that? What are my rights? What should I do?”

AT THE TIME, Gougeon-Catarino did not realize the extent of damage the strike had caused. She did not lose consciousness. Afterward, despite having a headache and feeling “a bit off,” she was even able to drive herself to the hospital.

She didn’t know traumatic brain injury can lead to secondary impacts which evolve over hours and days—cellular, chemical, tissue, and blood vessel changes that can contribute to further brain damage in a cascading effect. 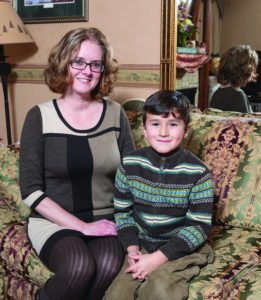 “It happened on a Wednesday,” she said. “The next day we had a snow day, and I took off the Friday to rest. I was scheduled to go back for a follow-up at Bronson (Medical Center) on Monday morning, and initially I only put in for a half-day sub for that day. I thought ‘I’ll go, I’ll get checked out, and I’ll be right back into my classroom.’”

She spent the long weekend in bed to avoid light, which worsened her pain. Then came time to go to the hospital for her follow-up, “and just that short five-minute drive, and the fluorescent lights in the doctor’s office, had me covering my head waiting to be called.”

A depth perception test revealed the loss of her ability to judge distance and see things in three dimensions. Her right eye didn’t track with the left one. A quick referral got her in to see a neurologist within a week. Soon after she started therapy at Hope Network Neuro Rehabilitation.

By that time, “I had no peripheral vision left at all, and without depth perception I would run into things a lot. My initial therapy for the first few months was literally walking a straight line, forward and then backward and sideways.”

Other therapies challenged her to avoid bumping into walls while walking and bouncing a ball. She wore a headband equipped with a laser to practice tracking the beam of light with her eyes.

Initially she couldn’t drive, relying on friends, neighbors or the metro connect van service to get to and from sessions two to three times a week. In between appointments, she worked on daily exercises—often with the help of her son, Cayden, who was four years old when she got injured.

She practiced focusing on letters printed on a rubber ball swinging from a string. She stared at a spot and tried to read letters on sticky notes arranged in a circle to rebuild her peripheral vision. She wore special glasses with different-colored lenses that showed if one eye was not tracking.

She practiced multi-tasking with a sort of sheet music that directed her to clap her hands and tap her toes to a beat. Reading gave her a headache. It would be 18 months before she built up to reading in 20-minute increments and was able to finish her first book.

“I would have to put a blank page over most of the text and just go down line by line, so I really had a much better appreciation for some of my students who’d had sensory issues in class.”

Doing too much would cause headaches and force her brain to shut down. “I called it my hibernation mode. I didn’t have a choice; I would just be in bed. I could not move, I wouldn’t eat, I wouldn’t drink all day long.”

Over time, she saw improvement in some vision problems. The biggest issue that remained after months of therapy—which she still deals with today—is the inability of her brain to filter out extraneous stimuli. The over-stimulation causes frequent headaches and brain fatigue.

“I definitely can’t do things for more than a couple hours at a time, and then I need to make sure I have enough rest time,” she said. “I get extremely fatigued, I get headaches, I get dizzy. When I get over‑stimulated, I’m off-balance again, running into things.”

Her doctor says those problems are permanent. “That’s my biggest issue yet, so there’s no way I could be in the classroom and try to focus and manage and actively watch everything going on.”

EARLY ON, Gougeon-Catarino had to begin easing back to work to keep getting payments from the state insurance program for people injured on the job—Workers’ Compensation.

“That first summer, workers’ comp wanted me to volunteer in a summer school classroom as an assistant to see how I could handle a classroom setting. I don’t remember if it was once a week or twice a week for an hour or something at a time. That was tough for me.”

The local president remembers looking up to Gougeon-Catarino as a new teacher working in the same building. “She is great with kids,” Miller said. “I’m so disappointed this happened to her but glad she felt supported while working to recover.”

When the new school year started that September after her injury, Gougeon-Catarino was further required by the state to return to “light duty”—which felt anything but light—for two hours every other day, at $10 an hour. Her workers’ compensation benefits were reduced accordingly.

She was placed in the classroom of a special education teacher who also had help from a paraprofessional. On bad days, she had trouble making it from the parking lot to the office before needing to lie down from her head spinning.

“I’d have to touch the wall the whole way to her classroom, or have a student walk with me. I could never be in the hallway during passing time. It was horrible.”

Still she finished the year, complying with requirements to increase to four hours every other day by spring break. “That was too much. I spent every weekend in recovery, doing nothing with my son.” Her ex-husband took on more parenting time, but not being with her son was painful.

That’s when MEA UniServ Director Tim Russ suggested she apply for duty disability retirement, “a long and daunting process that is essentially admitting her career was over,” Russ said. “It took several months of communication and advocacy to get her on the journey.”

The legal threshold for drawing early retirement is “total and permanent” disability which is a loaded term emotionally, Russ added. Gougeon-Catarino admitted it was difficult to accept.

“I used to be super-mom and super-teacher—in at 6:30 in the morning, not leaving until 5:15 when I had to pick up my son at daycare, come home, make a home-cooked meal, play with him, and get up the next morning to do it all again,” she said. “Who am I now if I’m not a teacher?”

But she had to face reality. Always frugal, she knew savings wouldn’t last long without income. When she finally agreed to apply for disability retirement, Russ helped her through the process.

Several months later, the answer came back from the Independent Medical Advisor at the state’s Office of Retirement Services: Denied. A separate application for Social Security disability was also turned down. Then her Workers’ Compensation benefits were terminated.

“It was really scary,” she said.

It took more than one year and two four-inch binders of medical records and documentation for her MEA-provided attorney, Karen Schneider, to put together Gougeon-Catarino’s appeal on behalf of MEA.

“It is time-consuming and complex, and you have to be dogged,” Schneider said. “It’s a little bit like fighting City Hall. Most people don’t have either the background or the knowledge of what they need to do, and they just give up.”

At the end of October, one day after her birthday, Gougeon-Catarino got a decision on her disability retirement appeal: Granted. With 23 years of service. She would also have access to health care as a result.

“I’m a fighter, and I wasn’t going to give up, and it finally feels like it’s all been worthwhile,” she said. “Now I tell all my colleagues that are still teaching, ‘Keep paying your union dues. You never know when you’re going to need it, and when I needed it they were there 100 percent.’”

A QUIETER part of her battle has been internal. Gougeon-Catarino was always the kind of teacher who enjoyed building relationships with students, getting to know them and letting them know her, discussing meaningful issues in class, laughing a lot and showing she cared.

But for the first few months after her injury, she was just angry. “The constant headaches, the fatigue, all the things I was missing out on with my son. Everything. I was frustrated.”

It hit her one night, she said: “I thought, This is ridiculous. You’re not getting anywhere by being mad and focusing on what you can’t do. So I challenged myself to focus on what I did still have, what I could still do, and I started every night writing down at least one.”

On her worst days, in pain or unable to function, she might only write down “warm house to live in” or “food in the fridge.” But the gratitude journal helped her believe things would work out.

A brain injury support group and her church community gave her a place to give and receive support. To combat isolation, she tried making friendly conversation with people when she was out and about.

And she found volunteer opportunities that made her feel like a teacher again—supplying books to residents of a homeless shelter once a week, mentoring a second grader at her son’s school, tutoring two students in reading, ministering to jail inmates, and helping a human trafficking survivor with English skills.

Sometimes she has to cancel activities if she’s having a “bad brain day,” but people are understanding. “I’m finding new ways to be productive,” she said.

“This has been quite a journey, but it’s opened up other possibilities and I feel good about it. My life has meaning and purpose again.”

MEA member Leah Porter knows the power she holds as an early childhood educator to spark a love of learning in students that will stay with them forever. She remembers one who lit hers. She still gets choked up thinking of her second grade teacher at North Elementary School in Lansing, Mrs. Henderson, who simply […]