The celebration was short-lived when members of United Teachers of Flint learned the district was offering to pay each of them a $22,500 bonus, using some of the federal COVID-relief money sent to the district this year. 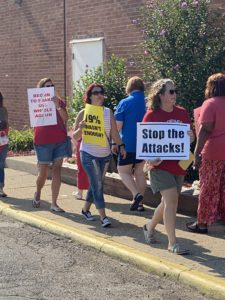 Soon after that, in contract negotiations that have lasted 18 months, the district pitched a three-year salary and step freeze.

“We put a survey out to our members, because we didn’t want to make a decision without their influence,” said Karen Christian, local president. “The response was very clear: We’ll take the bonus, but we’re not taking a freeze. No way.”

Flint teachers have endured salary and step freezes in 11 of the past 12 years and worked all last year under an expired contract. In 2014 they took a 19% pay cut, and suffered dozens of lost positions, to help bring the district out of debt. Now the debt is gone, but deficit spending remains.

“That’s not our fault, and we’re tired of everything getting done on the backs of us,” Christian said. “Something needed to change.”

Those messages were hammered home with district leaders at the negotiation table and when union members turned out in force to conduct informational picketing and attend a Flint Community Schools board meeting in July—all of which garnered significant news coverage.

Teachers on the picket line carried signs that read, “Begin to make us whole again”; “Stop the attacks”; and “19% wasn’t enough?”

Recruitment and retention have remained a problem in the district for several years, as salaries have declined or stagnated and educators continue leaving for higher-paying districts. In addition, the starting salary has been among the lowest in the state.

In testimony at the July board meeting, MEA UniServ Director Bruce Jordan said it was no mystery why educators were leaving. Those who’ve stayed are still making less than they did in 2003.

For that reason he would not take concessionary proposals to the membership for consideration, Jordan testified. “The board needs to acknowledge and honor all of the concessions that took place over the last 12 years and recognize these weren’t meant to be forever. People have to have a career path.”

The membership was preparing to stand its ground with a job action, Christian said. Instead, a three-year contract will include COVID-19 bonus payments of $22,500, a 1.5% salary increase this year, and scrapping of a 37-step pay grid that tied movement to complicated and unrealistic triggers.

Under the contract, negotiations will begin in February for a traditional salary schedule with increases and step movements.

Strength in union takes many forms

Union Members Stand Up in Emotional Board Testimony

A Big Bold Thanks to the Mighty MEA