Innovation: A ‘Menu’ for Learning and Engagement 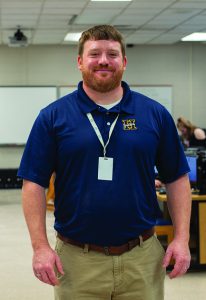 William Renner knows technology evolves at about a three-year rate, so the goal in his middle school computer science classes is not for students to learn the ins and outs of any particular software. Instead, “I want to teach them how to figure out the software,” he says.

That distinction may sound like semantics, but it’s central to the MEA member’s teaching philosophy.

Renner has made project-based problem solving the central components of his elective course for seventh and eighth graders at Hastings Middle School. Even more—already a huge proponent of student choice—he is evolving his practice toward a “menu classroom.”

“The menu classroom is where students come in and—just like when you go to a restaurant—they have a menu that gives them options to pick what they’re going to do to foster their learning,” said Renner, who taught math in Battle Creek for nine years before starting in Hastings five years ago. 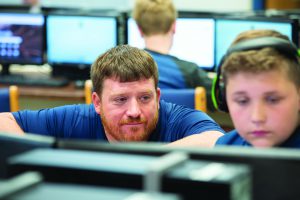 Renner believes virtual and augmented reality, in addition to drones and 3-D design, will bring many types of jobs in the future. His students have a variety of ways to demonstrate learning.

Call it differentiation or organized chaos—Renner calls it both—but on many days students in the same class period will be coding bots, programming virtual worlds, rebuilding equipment they’ve torn apart, creating and editing video, and more.

“All of them are getting to the same skills, but each one is getting there a little bit differently.”

Whatever it’s called, the students are engaged. “I don’t think I’ve written a referral this semester,” he said during a classroom tour just a few days from the end of school in June.

Renner’s approach has earned him a place in the state’s new Innovative Educator Corps, which provides a $5,000 grant and $5,000 stipend—renewable for up to two years—to educators seeking to expand and extend programs that help students become ready for future careers.

Renner is using his state grant money to purchase hardware to allow his students to work with drone technology, advanced robots, and virtual and augmented reality. “I wanted to provide my students with more opportunities to figure things out, and I wanted to bring in more hardware that would allow for career connection.” 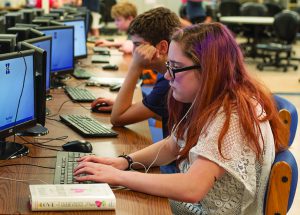 Every project ends with a reflection in which students connect the skills they learned with jobs aligned to them, which often requires additional research. “We want our eighth graders entering high school already thinking about career paths,” he said.

First he has to get them comfortable with making decisions about their own learning: what project to do, which technology to use, where to find help, or how to troubleshoot difficulty. The problem-solving he expects from students is a big change for them, he says.

“It’s a fine line between giving them the support to figure it out on their own and giving them so much support that you’re undoing your end goal of having them learn how to advocate for themselves,” he said.

Students work through skill-building exercises at their own pace through the 21Things4Students.net website, in addition to completing group projects such as the “cardboard challenge” (started by a California boy who built an arcade from cardboard) and choosing an open-ended problem to design a solution for.

The struggle pays off in deeper engagement and motivation, he says.

This summer for the first time the excitement extended beyond the school year with a free four-week half-days STEM summer camp for 30 middle schoolers headed by Renner. The partnership with his alma mater, Western Michigan University, included four field trips and lots of fun science, engineering and math activities.

“It’s something that’s never been offered here before to help with summer slide and give these kids access to high-quality summer experiences they might not otherwise have.”

Nearly 40 percent of students at Hastings Middle School qualify for free and reduced lunch. The city is not served by an expressway, and rural sections of the district do not have high-speed internet or reliable cellular service.

Renner has made it his mission to write successful grant applications to equip a state-of-the-art technology and computer science classroom. As of June, he had secured $23,000 in gifts and grants in just 18 months—excluding the latest one from the Michigan Department of Education.

“Once you’re able to show your community ‘Hey, I want to do this, and here is what it means,’ most of my grants and gifts have come from local supporters.”

His double-size classroom is half desktop computer lab and half maker space with flexible seating, a collaboration space, and four 3-D printers, among other gadgetry. This fall Renner starts his sixth year in Hastings with a new laser printer and sound-proof video booth with a “green screen” capability.

His MDE stipend requires him to find ways to spread his innovative ideas beyond the four walls of his classroom. Renner plans to work with his digital and face-to-face learning networks in addition to developing a Google site with student-designed pages to share resources with others.

“I love what I do. I love the support that I’ve been able to get. I love coming to work every day.”