When the COVID-19 pandemic hit Michigan last March, MEA member Chris Thomas found himself in a unique position to help other educators in the district where he worked – Ann Arbor – get up to speed in figuring out how to deliver remote learning. 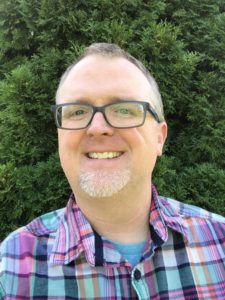 Now he’s doing the same for thousands of others in Michigan and across the country through a partnership with MEA and NEA to deliver free member-to-member professional development on the most pressing issues of the day.

“Preparation meets opportunity meets need,” said MEA UniServ Consultant Chad Williams, who has facilitated a series of webinars by Thomas and a team of working educators who are experts in ed-tech for MEA’s Center for Leadership & Learning. “All of these presenters are immediately credible in the eyes of their peers.”

With the sudden closure of schools in March, Thomas tapped a network of tech-savvy colleagues from years of serving as a teacher-leader providing training and developing programs in blended learning and educational technology. 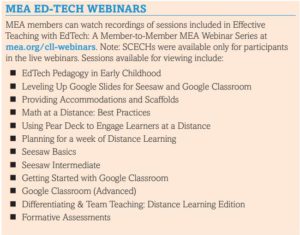 The team has quickly developed a catalog of webinars as MEA presenters on a range of topics useful to teachers of all types struggling to make a sudden shift to remote learning. Because Thomas and his team were able to hit the ground running, they played a similar role with NEA.

“This is union members as teacher-leaders supporting other union members,” Thomas said. “We’re positioned to be super relevant, offering stuff that people can use the next day to support themselves, their colleagues and their students in these challenging times.”

So far nearly 15,000 educators from 14 states have benefited from the MEA webinar series coordinated by Thomas and delivered via the state and national unions. In Michigan, one live webinar session attracted more than 260 participants on one Zoom call.

“Just the sheer volume of people signing up for these sessions is remarkable,” said Thomas, a 20-year teaching veteran who was a finalist for Teacher of the Year when he worked for Department of Defense schools in Germany before returning to Ann Arbor in 2013.

To get up to speed quickly, Thomas leveraged networks of educators he had connections with through his work as a teacher-leader in Ann Arbor’s blended learning program and as a mentor in MEA-NEA’s Early Career Learning Labs, among other union roles he’s played.

One of the MEA member-educators he tapped was Ellen Brooks, a sixth-grade teacher in her second year at Monroe Public Schools who previously taught first grade for five years in Ann Arbor. Brooks began this journey in a cohort learning about ed-tech with Thomas in her second year on the job.

“I had a ball, and I learned a lot more about the pedagogical frameworks for thinking about educational technology, and it shifted my entire teaching practice pretty dramatically,” Brooks said. “I was incorporating technology in a lot of different ways – even with little ones, which many people didn’t think you could do.”

Eventually Brooks became a facilitator alongside Thomas, training educators in Ann Arbor and presenting to others at conferences across the state for MEA and the Michigan Association for Computer Users in Learning (MACUL).

Being a teacher has always been about being part of a community, Brooks said, but today that community is larger and spread across a bigger terrain: “All of the sudden teachers who are very distant from each other can see we all have the same battles and the same goals. It’s powerful.”

Teaming with Thomas in live virtual presentations to provide immediate support for thousands of educators across the U.S. has been a moving experience, she added.

“I cannot describe the feeling of seeing in the chat someone from Kansas saying, ‘Thank you so much; I finally know where to start,’ or someone from Missouri saying, ‘I don’t think this will work for me. Is there something else?’”

There is no magic to the sessions organized around topics such as effectively using Google Classroom, teaching math at a distance, providing differentiated instruction and accommodations, addressing social-emotional needs, and planning a week of remote teaching.

“With all of these shifts that we’re making, we’re trying to not just fill the gap and be like, ‘Here’s a thing you could do,’ but to also say, ‘Here’s how you think about it and make it work for you in a meaningful context for your demographic.’”

Brooks’ journey from ed-tech learner to teacher shows how educators are empowered by opportunities to share expertise, said MEA’s Chad Williams. “Rank-and-file folks really want to contribute, and when they’re allowed to step into the role – that kind of leadership is infectious.”

If you are interested in bringing meaningful PD to your colleagues, contact MEA UniServ consultant Chad Williams at cwilliams@mea.org.