How “Enhancement Millages” are helping students and educators

Longtime school custodian Tov Pauling has a unique perspective on what’s happening in Wayne-Westland schools. To sum it up, he quotes Carl Reed—the custodian character from the 1980s “Brat Pack” movie, The Breakfast Club—“I am the eyes and ears of this institution.”

“No joke,” he continues. “I see everything.”

In his work role over the past 35 years—and now in his third term as president of his local MEA unit of custodial, food service, and transportation employees—school custodian Tov Pauling has traveled far and wide through his large suburban district.

What he’s observed in Wayne-Westland over the last dozen or so years has similarly played out in other school districts big and small, rural and urban, across the state. It has not been easy to witness.

“Before this last contract, our (support staff) employees hadn’t had a raise in about 11 years. And the young teachers were hurting…stuck on step one for several years, they were leaving. They went into other careers, or they left for other districts that were paying more.”

He couldn’t blame them for bailing, he said. As a trusted sounding board, he often listened to young teachers’ complaints about the below-average starting salary level where they remained trapped during a multi-year step freeze.

“I heard a lot of them saying, ‘I love being a teacher, but I can’t live like this. I’ve got a bachelor’s degree, and I’m still living with my mom.’ We had people with families on Bridge cards. They were frustrated.”

Now the tide has begun to turn in Wayne-Westland, thanks to a game-changing revenue source that an increasing number of school districts are tapping. “It’s built the morale back up,” Pauling said—referring to wage and salary increases that have stabilized staffing in the district.

Following years of inadequate school funding from the state, districts are banding together to pass a different kind of funding measure—known as a Regional Enhancement Millage—which provides general fund dollars for operating costs.

The money from an enhancement millage goes to all public school districts within the boundaries of an Intermediate School District (ISD) if a majority of voters in the region approve it. Unlike bond measures, the money can be spent on whatever priorities a local community chooses.

“Every region in the state should be passing an enhancement millage,” says MEA Economist Ruth Beier, who has made it her mission in recent years to educate both MEA members and superintendents about the flexibility of enhancement millages and how to get them on the ballot.

Regional enhancement millages have been allowed under state law since the 1994 passage of Proposal A, the state Constitutional amendment that fundamentally altered the system of funding public education in Michigan to reduce disparities between rich and poor districts (in theory).

Ever since then, no single district can ask voters to raise taxes for general operating funds, but a group of districts within a region can do so. In 25 years, only 8 out of 57 regions have passed enhancement millages—but five of those have come in just the past five years.

Next month, a ninth will try. On Michigan’s March primary ballot, voters in Macomb County are being asked to approve 1.9 mills over 10 years, which adds up to $1.90 per $1,000 of taxable valuation to provide an additional $418 per student in 21 school districts.

A community coalition supports the Macomb for Kids campaign, because as the website states, “Michigan’s school funding system is failing our students.” The measure will allow schools to reduce class sizes, grow career and technical programs, and improve school safety.

Student needs are increasing and resources from the state have not kept pace, said Dr. Bob Ross, school board president at the state’s second largest district—Macomb County’s 28,000-student Utica Community Schools. “We’re tired of cutting, and there’s nothing left to cut,” he said.

An MEA member and respected physics professor at University of Detroit Mercy, Ross said the state has continued to pass unfunded mandates, such as the third-grade reading law, which puts other programs and services in jeopardy, such as art and music.

“The people in Macomb County love their kids and want them to have the best opportunities,” said Ross, whose four grown children attended Utica schools. “This is something that can create a galactic shift in the way we educate our kids.”

Polls show 7 in 10 Michigan voters believe the state’s public schools are underfunded. And numerous recent studies have documented the dramatic gap between the cost of educating a child in Michigan and the amount of per-pupil funding school districts receive from the state.

The most thorough analysis ever conducted in Michigan pegged underfunding at a staggering $2,000 per student. The study was released in 2018 by the School Finance Research Collaborative, paid for by a bipartisan group of leaders in business, foundations, and education. “Our students will continue to fall behind if our school funding system doesn’t address their wide-ranging needs,” the study said.

Education funding increases in Michigan are last in the country over the past 25 years, a Michigan State University study reported last year. Simply dedicating the same share of the economy to education as a decade ago would give schools the dollars they need, the report said.

Beier, MEA’s economist and expert on the subject, agrees. Most school districts in the state have only recently surpassed their per-pupil funding level from 2010 in actual dollars. With inflation factored in, it’s clear to see the financial losses schools have suffered in the last decade. [See table, below.] The precipitating factor came in 2011 when the GOP-controlled Legislature and Gov. Rick Snyder passed a $1.7 billion business tax cut and cuts to education, which forced Michigan districts to slash $478 per student. 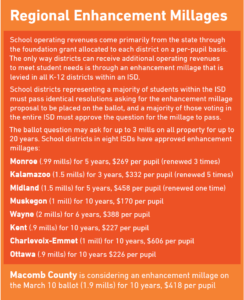 “The state turned its back on schools and then kept facing the other way, which devastates an education system,” Beier said. “One answer to this is the enhancement millage, which allows local school districts to increase their own operating revenue.”

Both Democratic- and Republican-leaning areas of the state have passed regional enhancement millages, most recently in the Ottawa ISD, where 0.9 mills generates $226 per student in 11 west Michigan districts over 10 years.

The additional funding had an immediate impact in Grand Haven schools where seven new social workers were hired to boost counseling and mental health services for students, said Amy Cahalan, president of the local education association.

“I think it’s important for our communities to see that it works,” Cahalan said. “The money is going right into the programming and services that we had lost because of the cuts we’ve gone through the last 15 years.”

Before Ottawa, it was Wayne, Charlevoix-Emmet, and Kent County in 2017, and Midland, Kalamazoo, Monroe, and Muskegon before that.

Some districts have eliminated deficits. Others, like Wayne‑Westland and Detroit, increased salaries and steps for employees who had taken concessions or suffered freezes over multiple years—a move to address educator shortages that include teachers, bus drivers, para-educators, and others.

Many of his members have expressed gratitude for the turnabout in the direction of pay, Wayne-Westland’s Tov Pauling said of the custodians, bus drivers, and food service workers he represents. “We all care about the kids. We give 110 percent, and it’s nice to be valued.”

That’s why—whenever MEA’s Beier talks with a superintendent about budget problems—she ends every conversation with the same question: “When you are going to take matters into your own hands and ask your voters for an enhancement millage?”