SVSU Prof is National Higher Educator of the Year 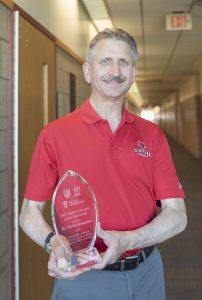 How to reduce student attrition is a topic of great interest to college administrators, but Saginaw Valley State University (SVSU) Communication Professor Dr. David Schneider is on a mission to make it the concern of every instructor and professor as well.

A longtime member and leader of MEA’s higher education branch, Michigan Association for Higher Education (MAHE), Schneider is known for his research challenging common assumptions about why students leave their colleges and universities.

“There’s an old belief that students don’t do well in school so they bail out, and that may be true,” Schneider said, “but we’re also learning that they step out for reasons other than not being able to succeed academically.”

First-year college students need to develop a sense of “attachment” to their college or university, Schneider has found—and faculty are perfectly positioned to help. The key is for students to become “activated,” both socially and academically, he says.

“Faculty can identify the pathways where that will happen.”

Entering his 34th year at SVSU, Schneider not only puts his research into practice in his own classes. He delivers his message at national conferences and encourages colleagues to better engage students in ways that strengthen their sense of belonging.

For his student-centered approach to teaching and his union leadership at the local and state level, Schneider has been named NEA’s 2019 Higher Educator of the Year, a national honor he deemed a “humbling and moving experience.” 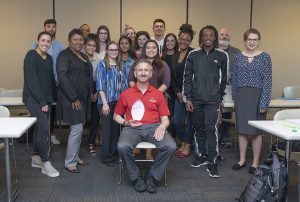 Professor David Schneider is known for his research into why students leave their colleges and universities. He argues faculty can help students develop a sense of belonging.

“I’m just awestruck that my colleagues would think to nominate me, and deeply moved to be selected for the honor,” he said.

Professionals who attend Schneider’s conference presentations are challenged to rethink their practices, said Dr. Colleen Pilgrim, a MAHE board member and Schoolcraft College professor who nominated him for the award.

As a developmental psychologist, Pilgrim well understands the importance of early childhood attachment—emotional bonding with others—as a predictor of success later in life. But Schneider’s work extends the theory to the college experience.

“I think he really is onto a key aspect that we should not overlook with our students in higher ed,” she said. “Parents often worry about whether their child has picked a major when really they ought to be more worried about how they feel about the school they are in.”

As many as 50 percent of students at comprehensive universities like SVSU will not earn a certificate or degree within six years, research shows. The problem is not always academic preparation, according to Schneider’s research.

One of the ways that Schneider helps SVSU students feel more closely bonded to their school is by connecting them to other students and to social groups on campus.

That could mean introducing new students interested in a particular major to other students who are attached to the major in some organized way. “Now they’re making friends in college who are interested in the same professional track.”

If he recognizes a student has a particular skill or talent, Schneider might recommend trying an activity or role on campus. For example, he might steer a student who’s good at public speaking toward becoming an orientation leader for the next group of incoming students.

In addition to finding social connections, new college students often need to be activated and plugged in academically, Schneider says. Many don’t understand how to develop time management or productive study skills or what it means to be “a self-regulated learner.”

Every college campus offers a variety of academic support services, but the students who need it the most use it the least, he said. Faculty are in a position to promote the services and encourage students to use them.

Many professors talk about student academic services at the beginning of a semester or term, but that might not be enough to motivate reluctant students to action. Sometimes it takes follow-up and individual encouragement.

“There are other points in the semester where as a professor you’ve got their attention more, after you return the first assignment, or after the first test and they didn’t do so well, so it’s important to return to that message again.”

Students also lack awareness of a major pitfall for many—use of devices in class. “They underestimate the damage that unstructured use of personal technology has on their academic performance,” Schneider said.

He addresses the subject head-on without banning use of tablets, laptops, and notebooks in his classes. Instead, he bans phones and shares several different studies with students that show direct negative impacts of use of devices in class, “and it’s an eye opener for them.”

In his classroom use policy, Schneider makes a distinction between using technology to consult the class website or use a digital textbook versus texting, scrolling through social media, or surfing the web.

“For student success, we need to have a conversation with our students and we need to keep them engaged in that conversation. Just talking about it one time isn’t enough.”

In addition to his leadership in the instructional arena, Schneider has been an effective labor advocate, “creating social awareness about the critical role of organized labor,” Pilgrim wrote in her nomination letter.

He has served as chief negotiator for his local since 1996, as president of his local and president and board member of MAHE. His goal has been to communicate a broader view of the union’s role beyond simply bargaining for wages and benefits.

The union plays a significant role in negotiating areas of curriculum, instruction and research, Schneider said. At SVSU the union participates in “shared governance” that determines the quality of students’ experiences.

Schneider was the second-ever winner of NEA’s Higher Educator of the Year award. Although he could not attend, he was honored in July at the NEA Representative Assembly in Houston, Texas.

“Our honoree, David, exemplifies so much of what is best in our profession,” said DeWayne Sheaffer, president of the NEA National Council for Higher Education told more than 8,000 delegates to the assembly. “He’s a trailblazer, helping to challenge his peers.”