Kathy Bommarito worries that a decision this spring by the Avondale School District where she is union president could represent a foot in the door for online school vendors seeking to displace educators in the classroom. 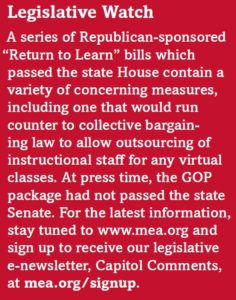 In May the Avondale School Board agreed to close Avondale Academy—named Michigan’s Alternative School of the Year in 2018—and replace it with a fully online virtual academy operated by an outside vendor starting this fall.

In Avondale, as in many districts across the state, teachers at the alternative high school were not part of the Avondale Education Association before all seven were laid off following the board’s 5-2 vote approving a virtual school.

Had they been a part of the union, those educators would have been able to rely on a process for layoff and recall that protected their rights, said Jake Louks, an MEA organizer who helps non-union K-12 and higher education school employees through the process of unionizing.

Many AEA members showed support for their non-union colleagues at the academy by calling parents from the school to raise their voices, attending the virtual meeting, signing a petition to save the academy, and testifying before the board.

Paul Sandy, one of the seven laid-off teachers, fought hard against the district’s move. Because research shows virtual schools are not as effective as a credentialed educator in a classroom, technology should be a supplement to education—not a method for disinvestment, he said.

“Betsy DeVos and other edu-profiteers are foaming at the mouth thinking of how to use these solutions during this pandemic to cut costs on the most vulnerable students,” Sandy said.

The global COVID-19 crisis has been used by vendors of online education resources as a huge marketing opportunity, despite there being little to no evidence of their effectiveness, according to a literature review by the Great Lakes Center for Education Research & Practice.

Numerous studies have shown high turnover and dismal student achievement and graduation rates at virtual schools, yet blatant profiteering with little to no legislative oversight has been the norm, the Great Lakes Center found.

For those reasons, the Utica Education Association got involved quickly at the first sign the district was exploring the possibility of using a poorly rated outside vendor to provide curriculum for online learning necessitated by the pandemic.

After parents joined with the local union to express disapproval of the idea, the district and UEA leaders came to an agreement for Utica educators to create the virtual learning environment.

“We are deeply grateful for the support we have received from our parent community and are excited about the opportunity to collaborate with Utica schools to do the best thing for Utica kids, and to be the best stewards of our children’s learning,” UEA President Liza Parkinson said.

One thought on “Virtual Schools Seek Digital ‘Foot in Door’”

Click to view online. In this issue: Letter to Members: You are the Strength in Union Above and Beyond: Retired educator Pam Kellar Nominations sought for ESP Caucus Board My View: Eclipsing Restoration with New Growth Savoring a Win for the People Push is On for Changes to Evaluation System Legislative Councils: a case study […]