Although the children on her bus can’t see her smile through the face mask, MEA member Julie Ingison makes sure they can hear the smile when she greets them by name each day. They also can feel her love through the huggable gift she crafted for each child over the winter.

“We were talking one day about what everybody’s favorite animal was, and I wrote that down,” Ingison said. “I thought it would be fun to make a stuffed animal specific to each child. No two are identical. I made a monkey, baby Yoda, jellyfish, an octopus, dogs and cats, an alligator and dinosaurs—it was quite a zoo I had going there.”

Ingison handed out the gifts at the end of a school day, wrapped with the student’s name on it. Most honored her request to wait until they were home to open it.

“They were so excited just to get something—before they even knew what it was,” she said. “Then for several days they were either talking about their animals or bringing them on the bus. And the fifth graders liked it just as much as my kindergarten and first graders.”

Ingison first learned how to make a few crochet stitches from a friend in the military in her 20s. Her aunt, a master of the craft, showed her more tricks, and Ingison eventually taught herself to read patterns. 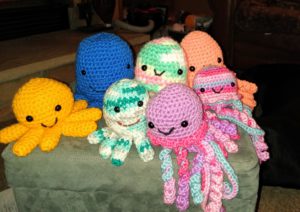 For Project Stuffed Animals, she used some patterns to start but ventured into her own creative territory as well. “After making a few animals, you kind of figure out the basic body construction and it’s just a matter of making the ears and tails and tentacles that go along.”

A Lansing native, Ingison learned to drive a bus in the military and returned to it after retiring. At first she didn’t realize the job would put to use the Human Services degree she earned during active duty.

But driving a bus is about “more than getting them to and from school,” she said. “It’s about communication and building relationships. Something we talk about often is proper courtesies and conflict resolution, like how to handle it when someone is bothering them.”

This year, in addition to wearing masks on the bus, students sit in assigned seats to ensure as much distance between them as possible. The regular seating pattern also helps with contact tracing if COVID‑19 exposure happens.

Whenever she has a chance, Ingison gets to know the students in her charge. Because she’s kept the same in-city route for four years, she gets to see them grow and change—and eventually move on.

She lets the children determine the direction of conversations—if they want to talk about school, pets, hobbies, vacations, or some trouble that’s bothering them. “A lot of times it’s just a matter of listening. They want somebody to talk to who will listen, and that’s what bus drivers do.”

Read more stories from the series, “What it’s Like: COVID Vignettes”:

Karen Moore: secretary with a purpose

A Year for the History Books

Demetrius Wilson: ‘We’ve made it work’

Jackie Lyons: ‘I walked away’

Claudia Rodgers: Committed to her Work

Tavia Redmond: ‘Let me tell you about tired’

Gillian Lafrate: Student Teaching With a Twist (or two)

Jaycob Yang: Finding a Way in the First Year

Eric Hudson: Playing a Part to Beat the Virus

Sally Purchase: ‘Art is a little bit like a relief’

by Richard Mui As a second generation Chinese American, I am proud to live in a country that has provided me and my family so many opportunities for a better life. As a veteran U.S. history teacher, I have the unique opportunity to teach students about the historical context of many of the issues they […]

Last week, the State House passed HB 4411, the K-12 school budget for 2021-22.  At $16.74 billion, it represents the largest ever investment in K-12 public schools in Michigan history. More importantly, it finally closes the gap in the per-pupil foundation allowance that has existed since Proposal A passed in 1994, bringing all districts to […]